One of the last people who saw Ana Walshe before she vanished described a “festive” atmosphere during a New Year’s Eve get-together – during which nothing seemed amiss between her and her husband.

“We hugged and celebrated and we toasted just what you do over New Year’s,” family friend Gem Mutlu told WBZ-TV.

“There was a lot of looking forward to the new year. There was no indication of anything other than celebrating the new year, problems on hold,” he said.

Mutlu said he was stunned when Brian Walshe called the following day.

“I said, ‘What’s wrong? Is there something wrong?’ He said, ‘Yeah, Ana is missing,’” Mutlu told the news outlet.

“She was texting with friends. She was sitting next to me at the barstool at their kitchen. There was absolutely no indication that any modicum of a tragedy, of disappearance, or anything else could have happened that night,” he said.

Mutlu, who met Anna through her husband, added, “a part of me had this suspicion all along that there may have been foul play and that somehow just the story just wasn’t adding up.”

He told WBZ-TV that Ana, a real estate agent who has worked in Washington, DC, had been staying in separate homes while their three young boys lived with Brian in Cohasset, Massachusetts.

“My biggest fear had shifted towards the children,” Mutlu told the outlet. “I wondered if the children were safe.”

On Jan.4, the day Ana was reported missing to authorities, Brian left a voicemail with his wife’s friend in DC.

“Good afternoon, this is Brian Walshe. I hope all is going well. I was just reaching out to basically everybody I could. Ana hasn’t been in touch for a few days,” Brian said in the voicemail obtained and verified by CBS Boston.

“If you know anyone that may have had contact with her, you know I am trying to call everyone. I am sorry to bother you. I am sure everything is fine,” he said.

On Monday, Brian pleaded not guilty to misleading a police probe into the disappearance and was ordered held on $500,000 bail pending a court appearance Feb. 9.

Assistant DA Lynn Beland told the judge that a blood-covered knife was found in the couple’s Massachusetts home.

Surveillance video also showed he visited a Home Depot store in a mask and gloves to buy a tarpaulin, mops, tape, bucket and other cleaning supplies, she said.

According to an arrest affidavit, Brian told police his wife left on a “‘work emergency’” early on Jan. 1 – but the is no record of her taking an Uber, Lyft or taxi to the airport. 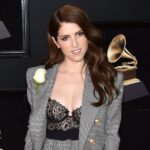 Anna Kendrick Created Embryos With an Ex Before Split 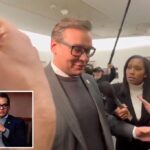