How do you say “Imitation is the sincerest form of flattery” in Swedish?

Ikea has threatened to sue the makers of an indie horror video game over virtual locations that it says too closely resemble the iconic look of the furniture giant.

Fortune reported Tuesday that the Scandinavian furniture conglomerate — which racked up almost $40 billion in revenue last year — had served game designer Jacob Shaw with a cease-and-desist letter in response to his game “The Store Is Closed.”

Shaw, also known as “Ziggy,” is developing “The Store Is Closed” for release in 2024. The gory challenge is set in a furniture store called “STYR,” a Swedish word meaning “controls,” in which players have to ward off danger using makeshift weapons and forts.

Ikea, however, was less than impressed by the similarities. Citing “unfair competition and false advertising,” representatives from the law firm Fross Zelnick gave Shaw 10 days to “change the game and remove all indicia associated with the famous Ikea stores.”

Shaw told PC Gamer this week that he would comply with the demands — which included removing the blue and yellow color scheme and changing the display furniture designs — because he would “really rather not get sued.”

Even so, he is worried about how exactly to comply with the company’s request.

“Their requests are a little vague. Like, ‘furniture that looks like Ikea furniture,’ that’s not particularly specific.”

His present solution is “ripping out anything that is blue or yellow and adding some garish red everywhere,” plus removing “all the Scandinavian furniture, changing all the posters, probably remove the path [from the floor].”

With that said, the unexpected legal kerfuffle left Shaw with residual concerns.

“It makes me very nervous of changing the color scheme to something else,” he told PC Gamer. “What if Target sues me for using red?”

In a statement to Fortune, a spokesperson from Ikea said that while the appropriated look was “flattering,” the company “must be diligent to ensure that the Ikea trademarks and trade dress are not misapplied.”

“We’ve reached out to the creator of the video and asked them to make changes to those elements to ensure that this is no longer the case. They expressed that they understand our request and agreed to make those changes. This should all be well in time for the expected 2024 launch of the game,” the statement continued.

“We wish the creator of the game the best of luck!” 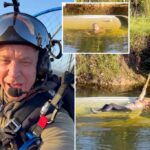 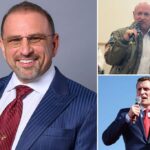