He must be over the moon!

Aldrin, who was the second person to land on the Moon after Neil Armstrong, shared the exciting news on Twitter, revealing that the lovebirds got hitched in an intimate ceremony in Los Angeles, Calif.

“On my 93rd birthday & the day I will also be honored by Living Legends of Aviation I am pleased to announce that my longtime love Dr. Anca Faur & I have tied the knot,” the NASA legend tweeted.

“We were joined in holy matrimony in a small private ceremony in Los Angeles & are as excited as eloping teenagers.”

The tweet was accompanied by two snaps from the private ceremony, which showed the new Mrs. Aldrin wearing a white gown adorned with rhinestones.

For his part, Aldrin looked dapper in a black suit paired with a bowtie.

Fauer, born in Romania, currently serves as the executive vice president of Buzz Aldrin Ventures. She earned a Ph.D. in chemical engineering from the University of Pittsburgh.

It’s not the astronaut’s first time saying “I Do.”

Aldrin was previously married three times, tying the knot with his first wife Joan Archer in 1954. The pair went on to welcome their three children: James, Janice, and Andrew, before the marriage ended in divorce in 1974.

A decade later, Aldrin found love with his third wife Lois Driggs Cannon. The pair were married for 24 years before divorcing in 2012.

Aldrin was propelled to fame — quite literally — after making three spacewalks during his glittering career as an astronaut.

He served as the Lunar Module Eagle pilot for the historic 1969 Apollo 11 mission, walking on the lunar surface for 19 minutes with Armstrong.

Aldrin is the only surviving astronaut of the three that took part in the Apollo 11 mission. He retired in 1971. 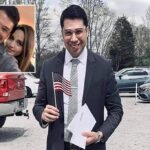 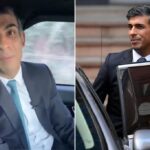