Spooky season is upon us, and whether you’re making plans to bring the kids trick-or-treating or creating the best costume to show off at a Halloween party, you’re going to need to know if the weather will cooperate.

So listen up, guys and ghouls! FOX Weather has you covered with a look at the Halloween forecast from coast to ghost.

With Halloween falling on a Monday this year, many people will be celebrating the holiday over the weekend.

“There are a couple of spots where you might need an umbrella or a poncho over your gear,” FOX Weather meteorologist Michael Estime said.

We’re going to creep it real for you if you’re living in places from the Ohio and Tennessee valleys to the Southeast – Sunday may not be the best day to get in the Halloween celebrations unless your eerie-sistible costumes can stay indoors.

“So for Sunday, we’re tracking that storm system that is diving through the southern Plains to close out our week to pull up into the Midwest,” FOX Weather meteorologist Jane Minar said. “So we’ll watch places like eastern Tennessee, Kentucky, even up through the Great Lakes, you could see a few spotty showers. But the East Coast is looking beautiful. Atlanta, we’ll watch for a few showers in your metro area.”

n the Northeast, temperatures will remain comfortable on Sunday. So, the weather there should be pleasant if you’re celebrating Halloween on Sunday.

Temperatures in New York City and the surrounding tri-state area should be in the lower 60s with a mix of sun and clouds. It will be mostly cloudy farther south along the East Coast in cities such as Norfolk, Virginia, and Atlanta, and temperatures there should peak in the lower to mid-60s.

Parts of the northern and central Plains and Intermountain West should enjoy temperatures on either side of 60 degrees on Sunday.

In the West, there will be plenty of sunshine from Los Angeles to Reno, Nevada.

What’s the weather on Halloween?

If the goblins in your home are celebrating Halloween on Oct. 31, the FOX Forecast Center expects some not so fa-boo-lous weather conditions in many parts of the U.S.

“On Halloween itself, our spooky day, the Northeast will be getting in on some showers,” Minar said. “So, we’ll have to maybe add in a few ponchos to those Halloween costumes. But really, from the middle of the country out west, we’re talking beautiful sunshine.”

The threat of rain will stretch across the eastern half of the country from the Ohio Valley to the Southeast, mid-Atlantic and Northeast. Temperatures will range from the mid-60s in the New York City tri-state area to around 70 degrees in Norfolk, Virginia, and Atlanta to the mid-80s in Miami.

There will be plenty of sunshine across the central and western U.S. Kansas City, Missouri, will see a high temperature near 70 degrees during the day on Halloween, and communities in Texas from Dallas to El Paso will enjoy temperatures in the lower to mid-70s.

However, temperatures will drop significantly on Halloween night across many parts of the country.

It will dip into the lower 40s in places like Seattle, Reno in Nevada and Billings in Montana.

Expect slightly colder weather in Denver and Fargo, North Dakota, where temperatures should drop into the upper 30s, so be sure to grab a jacket to put on over your Halloween costumes if you’re headed out for some nighttime trick-or-treating. 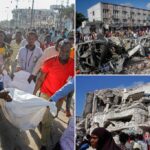 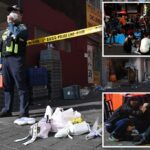 Partygoers tried to save Seoul stampede victims, but were already dead