BOYNE FALLS, Mich. – Just in time for the changing of the leaves, the world’s longest timber-towered suspension bridge is now open to sightseers in northern Michigan.

For those willing to ride a chairlift to the mountain top and pay a fee of around $25, the bridge provides breathtaking views of the Boyne Valley.

The bridge is only open to foot traffic and spans the length of three football fields between the peaks of McLouth and Disciples Ridge.

Two massive timber towers support the walkway, which has a 36-foot pane of glass in the middle, allowing visitors to see the valley below.

Operators say the bridge is open year-round, but there are restrictions for when the 1,203-foot-long span is shut down for safety.

The risk of thunderstorms with lightning poses a threat, so a weather event that is 15 miles or less from the site will force the shutdown of operations.

Precipitation will not necessarily force the bridge’s closure just as long as walking surfaces remain clear and visibility is adequate.

According to Boyne Mountain Resort, winds have already forced the bridge to close a couple of times during its first week of operations.

The walking platform is suspended by cables, which allow the bridge to sway to accommodate changes in the weather and the weight of guests. 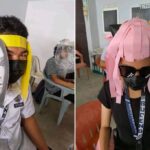 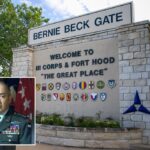 Fort Hood in Texas to be renamed after Gen. Richard Cavazos