A woman was arrested for allegedly pushing a 3-year-old girl “face-first” onto train tracks in Oregon on Wednesday in a horrific caught-on-camera attack, prosecutors said.

The toddler had been unwittingly standing next to her mother on Portland’s Gateway Transit Center MAX platform when the ruthless attack took place, video shows.

A stranger — believed to be 32-year-old Brianna Lace Workman — sitting behind the mother-and-daughter duo suddenly stands up and shoves the 3-year-old forward, according to the footage and the Multnomah County District Attorney’s office.

The girl, who was standing just beyond the white caution line, hit the floor first and slid over the edge head-first.

“The child landed face-first onto the metal rail and rocks before being quickly rescued from the train tracks,” Multnomah County District Attorney Mike Schmidt said in a statement.

Though the girl’s head can be seen making contact with the rail, she immediately sat up and reached for the good Samaritans who jumped up to rescue her. The toddler later reported a severe headache and had a small red mark on their forehead, Schmidt said.

The video shows the woman who shoved her sitting back on the bench as bystanders pull the girl to safety.

The toddler did nothing to provoke the attack, the district attorney said. 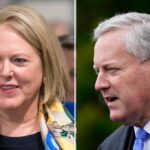 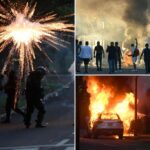