These tourists’ trip to India came at an extra charge.

Terrifying footage has captured rhinoceroses storming after safari tours in India, forcing drivers to frantically try to outrace them.

In one clip filmed on Dec. 30, a one-horned rhino chasing is seen chasing after a group of tourists at Manas National Park in the Assam state.

The massive mammal, which can run at a speed of up to 35 miles per hour, pursued the vehicle for about a mile. A second view of the chase shows that tourists were sitting and standing in the truck’s bed with little to protect them from the 3-ton animal.

Tourists can be heard screaming for the driver to go faster as the rhino comes within mere inches of the car. After a few exhilarating minutes, the rhino gave up and ran into the bushes, The Free Press Journal reported.

A second rhinoceros chase was posted on Twitter the next day.

The animal pursued the car on an open dirt road at the Kaziranga National Park, about 150 miles from the Manas National Park.

“Bhaga!” the tourists can be heard repeatedly yelling, which translates to “speed up.”

The riders eventually directed their screams away from the driver and toward the charging animal in an effort to scare it away.

As the video progressed, so did the rhino until it brushed against the tires of the jeep, the Press Trust of India said. The animal immediately ran off into the grasslands after making contact with the car.

The tourists eventually made it to safety, where they discovered marks of the animal’s teeth on the rear tire of the car. Authorities suspect the contact may have injured the animal and sent it retreating.

Such chases are rare for the animals — rhinos typically only turn aggressive if provoked, though will charge if they perceive a threat, according to the International Fund for Animal Welfare. 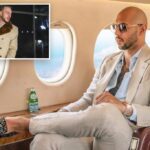 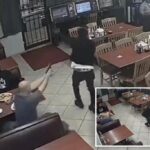