Tiger Woods (real name Eldrick Tont Woods) hasn’t had as much luck in love as he has on the green, but the world-renowned golfer has seemingly met his match in his longtime girlfriend, Erica Herman. After years of dating, and after Tiger’s harrowing rollover car crash in February 2021, the pair seem closer than ever. Here’s everything we know about Tiger’s girlfriend.

When Did Tiger and Erica Begin Dating?

Tiger and the Florida native, who is nearly ten years his junior, made their relationship official at the Presidents Cup in September 2017 in Jersey City, New Jersey. There, she was spotted wearing a “player spouse” credential. According to Page Six, Erica first met the athlete while she was an undergrad at the University of Central Florida in Orlando. While at UCF, she studied political science and had aspirations to become a lawyer. To help pay for college, she worked at the Blue Martini, where Tiger was a customer — however, the two didn’t become close until after Erica graduated.

In 2015, the PGA champion opened his own restaurant, The Woods, in Jupiter, Florida, and hired Erica to serve as the general manager, according to Golf.com.

Erica Is Supportive of the Golfer’s Career

Since their first public appearance, Erica has frequently been seen by Tiger’s side at major events and competitions. She even cheered him on from the front row as he was inducted into the World Golf Hall of Fame on Wednesday, March 9, 2022.

She also attended the 2019 Masters, where the golfer earned his fifteenth major title and later joined Tiger at the White House, where he received the Presidential Medal of Freedom.

Tiger’s children, Charlie, born in February 2009, and Sam, born in June 2007, approve of the relationship, according to People, and Tiger’s live-in girlfriend also gets the seal of approval from the golfer’s ex-wife, Elin Nordegren.

“Elin has a friendly relationship with Erica,” a source told the outlet in January 2019. “Tiger has come a long way and Elin acknowledges that. She is happy that he is dating Erica.”

Tiger and Elin’s six-year-long marriage ended in divorce in 2010.

The couple have gone through serious ups and downs together but still appear to be a united front. In 2019, Tiger and Erica faced a wrongful death lawsuit by the parents of a bartender at The Woods. The 24-year-old bartender was allegedly overserved at the sports bar, which resulted in a fatal crash in December 2018. The case against the couple was eventually dropped, according to Golf Digest.

In February 2021, the pair faced another terrifying ordeal when Tiger was involved in a car crash. The 15-time major champion’s SUV rolled over and the “jaws of life” were used to remove the golfer from the vehicle. The accident resulted in “significant” injuries.

“Erica dropped everything to be with Tiger the moment she heard what happened,” a source told Us Weekly in March 2021. “She’s been by his bedside, holding his hand and telling him everything’s going to be OK. He’s a champ and he’s got this.”

The insider added that her support “meant the world” to Tiger.

Tiger revealed to Golf Digest, in an interview released in November 2021, that due to the crash, he will never return to golf “full time ever again.”

“It’s an unfortunate reality, but it’s my reality,” he said. “And I understand it, and I accept it.” 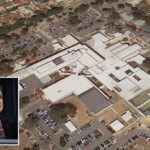 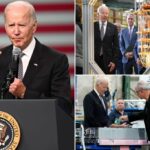