The Post asked Jean-Pierre about the matter three days after Musk fired Baker for allegedly slyly vetting the release of internal documents on decisions to suppress The Post’s October 2020 reporting on documents from first son Hunter Biden’s laptop.

“[Was] anyone in the Biden administration… in touch with Baker either regarding moderation decisions that critics call political censorship or regarding [Musk’s] transparency efforts recently?” a reporter for The Post asked Jean-Pierre at her regular press briefing.

“It’s up to private companies to make these types of decisions,” Jean-Pierre replied. “We were not involved.”

“I can say that we were not involved,” she went on. “And as I’ve said several times this week already… we’ve had this conversation many times in this briefing room, just the past couple of days. You know, of course, it’s up to these companies to make their own decisions about the content on their platform and to ensure… their own standards and policies.”

Musk fired Baker following the conspicuous absence of communications involving the FBI from an initial batch of documents published Friday night by journalist Matt Taibbi — who was provided with the records by Musk — showing that there were early internal doubts about Twitter’s claim to censor The Post pursuant to its “hacked materials” policy.

There was no evidence the laptop was hacked. As The Post reported at the time, the computer was abandoned at a Delaware repair shop.

A recently surfaced sworn declaration by Twitter’s former head of site integrity, Yoel Roth, said that platform representatives had “weekly” meetings with the FBI ahead of the 2020 election.

“I was told in these meetings that the intelligence community expected that individuals associated with political campaigns would be subject to hacking attacks and that material obtained through those hacking attacks would likely be disseminated over social media platforms, including Twitter,” Roth said in the December 2020 declaration to the Federal Election Commission.

“I also learned in these meetings that there were rumors that a hack-and-leak operation would involve Hunter Biden.”

The Taibbi-published documents did not illuminate the FBI’s possible role in censoring The Post.

Musk, who bought Twitter in October and vowed to restore free speech principles, tweeted Tuesday he had fired Baker, who worked as FBI general counsel from 2014 to 2017 before joining Twitter as deputy general counsel in June 2020.

“In light of concerns about Baker’s possible role in suppression of information important to the public dialogue, he was exited from Twitter today,” Musk tweeted.

Jean-Pierre on Wednesday declined to comment when Fox News reporter Jacqui Heinrich asked if the 2020 Biden campaign or the Biden family told Twitter the material may have been hacked. Heinrich noted that Twitter typically required a government assertion that material was unlawfully obtained.

Hunter Biden and the Biden campaign never directly denied the authenticity of the laptop documents, but insinuated it may have been the product of the Kremlin. Biden sudggested during a campaign debate with then-President Donald Trump that it was “a Russian plot.”

A second batch of Musk-released internal censorship documents was pubillshed Thursday night by journalist Bari Weiss. That installment revealed the censorship of certain accounts — after years of speculation about politically biased “shadow-banning.” The internal documents showed that Stanford professor Dr. Jay Bhattacharya, who was critical of the effects of pandemic lockdowns on children, was among the accounts whose reach was limited.

The role of government officials in censorship decisions gained significant attention when The Intercept on Oct. 31 reported that US officials were submitting through a secret Facebook censorship request portal examples of supposed misinformation. Jean-Pierre said at the time that the White House was not using that portal and it’s unclear if Twitter had any similar mechanisms for official requests.

The American Civil Liberties Union blasted the Facebook portal as a probable violation of Americans’ free speech rights, tweeting, “The First Amendment bars the government from deciding for us what is true or false, online or anywhere.” 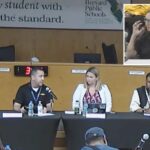