Her eldest grandchild is Kourtney Kardashian and ex Scott Disick’s son Mason Disick, who was born on December 14, 2009. His birth was documented on the season 4 finale of Keeping Up With the Kardashians, in which Kourtney memorably pulled out Mason while in labor. “The experience was so indescribable and life-changing, and I can’t believe he’s all mine,” the E! alum said at the time.

Kourtney and Scott went on to have two more kids – Penelope and Reign – while her famous sisters made sure to give her children cousins by having kids of their own.

Kim Kardashian, Khloé Kardashian and Kylie Jenner have all welcomed children over the years. Meanwhile, Rob Kardashian welcomed his only child, daughter Dream Kardashian, with ex Blac Chyna on November 10, 2016.

Kendall Jenner is Kris’ only kid to never be pregnant, though she’s hinted that she hopes to become a mother someday.

During a June 2022 episode of The Kardashians, the model seemed excited to become pregnant one day as she was baby shopping for Kylie, who was expecting her second child with Travis Scott at the time of filming. “Oh my god, being in a baby store feels real for me these days,” Kendall told Khloé during the outing. “Just like the day is coming for me, you know?”

Family is clearly important to the Kardashian-Jenners, who regularly spend holidays and go on vacations together as a family.

In fact, many of the grandkids are around the same age. Kim’s eldest daughter, North West, was born on June 15, 2013, just less than one year after Penelope was born on July 8, 2012.

Despite already having a large family, it seems that the Kardashian-Jenners aren’t ready to stop having kids. Kourtney has been open about her desires to have children with her husband, Travis Barker, whom she married in 2022.

Her IVF journey has been documented on the family’s Hulu show, though she admitted in September 2022 that she had taken a break from the process. “We started an IVF journey, but I stopped,” Kourtney explained to The Wall Street Journal Magazine. “It was a lot. I took a break to just focus on our wedding and getting married.”

Keep scrolling to see which of the Kardashian-Jenner sisters are pregnant. 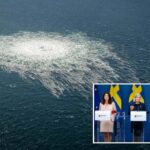 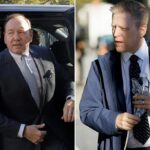