As Sister Wives star Kody Brown continues to feud with sons Garrison Brown and Gabe Brown, an insider exclusively reveals to In Touch that his relationships with his older kids are “pretty bad.”

“Kody has damaged his adult children’s relationship with him, except for a few,” the source says. “They want him to publicly come out and admit that his behavior has been bad. I don’t see that relationship really fully healing. It’s sad because Kody used to be such a great dad.”

The insider adds that Kody isn’t in contact with most of his older children except for Mykelti Brown, whom he shares with Christine, 50. “I know he’s gone and visited her several times. She doesn’t really care or get involved with the drama – she’s not into drama,” details the source. “She wants her kids to know the family and she hasn’t had a problem with Robyn. For the others, he hasn’t put in the effort. It’s not because he doesn’t love them; it’s because he’s a narcissist and when he starts feeling attacked, he retreats.”

As for Kody’s current relationship with Garrison, 23, and Gabe, 21, “their relationship is pretty much done – I don’t see them ever really believing or trusting him again,” the insider says. “I think they believe he’s very selfish and he really dropped the ball on his lifestyle choice. He gave up on his family.”

The source went on to explain that Kody’s tension with Garrison and Gabe has impacted his relationship with his older children. “The siblings are family, they’re very close. They support each other,” the insider shares. “When they see other family members hurt, the kids will stick together.”

Mykelti is likely the only one of Kody’s older kids “that wouldn’t get involved in the drama,” the source notes. “But everyone else I believe is sticking with them and supporting them. They all believe their dad was wrong on so many levels. He made some big mistakes and bad choices.”

Kody’s feud with Garrison and Gabe began when they struggled to agree with their father’s guidelines amid the COVID-19 pandemic.

In a January 2022 episode of the TLC show, Gabe argued that he should be able to see his girlfriend, Peyton, during the pandemic because she was self-isolating. However, Kody said he wasn’t comfortable with the idea because he couldn’t be positive that Peyton was following COVID-related protocols at the time.

Meanwhile, Garrison argued with Kody about maintaining his social life during the pandemic. Due to the tension, he eventually moved out of his family’s property in 2021 and went on to purchase a $329,000, four-bedroom, two-bathroom in Arizona. 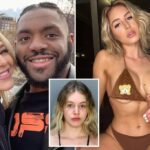