Where is Larissa Dos Santos Lima from 90 Day Fiancé now? Fans of the series will remember her roller-coaster romance with Las Vegas native Colt Johnson. After getting fired from the network following a steamy NFSW live-stream performance, the Brazil native still is making life in the United States work! Find out what Larissa is up to today and what she’s been doing since her sudden departure from the 90 Day Fiancé franchise.

What Seasons of ‘90 Day Fiance’ Was Larissa On?

Fans first met Larissa on season 6 of 90 Day Fiancé, which premiered in October 2018. After developing a relationship online with the software engineer, the pair met in person for the first time in Cancun, Mexico, and Colt proposed to the mom of two just five days into their trip.

Despite a rocky road to the aisle, the TLC couple married in June 2018. The pair returned to tell their story and split on seasons 4 and 5 of the spinoff, 90 Day Fiancé: Happily Ever After?.

Why Did Larissa Dos Santos Lima Get Fired From TLC?

The ex-TV personality confirmed she was fired from the network in September 2020, informing fans it was because of her affiliation with the adult live-streaming webcam platform CamSoda. She did a one-time, one-hour performance on the site to debut her plastic surgery transformation.

“I am no longer a cast member of the show 90 Day Fiancé,” she wrote about her departure at the time. “Because of my show with CamSoda, I was released from my contract with TLC by phone the day before ICE arrested me.”

The former reality TV star met her on-off boyfriend, Eric Nichols on the popular dating app Tinder. Larissa and Eric made their red carpet debut as a couple at her divorce party in March 2019, just a few months after her now-ex-husband, Colt Johnson, filed for divorce from the content creator on January 11 of that year. It’s unclear if the pair are still together romantically.

Colt and Larissa’s divorce was finalized in April 2019.

The OnlyFans star moved to Colorado with Eric for a “fresh start” in September 2020, however, that same month, she was arrested and detained by United States Immigration and Customs Enforcement (ICE), her rep confirmed to In Touch.

In October 2022, the social media influencer revealed she was packing up and leaving Las Vegas.

“Goodbye Las Vegas!” she wrote alongside a photo of her posing next to a yellow moving truck. “Can you guess where me and @ericjosephnicols [are] heading? New York, Miami or Texas.”

The season 6 alum announced that she was leaving her home of Las Vegas, Nevada, after initially returning in November 2021. 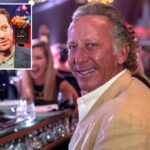 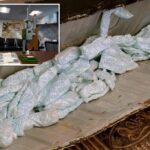