In a bizarre holiday ad, the Kremlin-funded propaganda outlet taunted its western foes by forecasting a future where families will eat their pets and live in darkness — because Western sanctions on Russia over the invasion of Ukraine have triggered soaring energy costs.

With a stark version of “Silent Night” as a soundtrack, two parents are seen gifting their delighted daughter with a beribboned pet hamster in 2021 — then, in 2022, connecting the little critter’s hamster wheel to a miniature generator to power the Christmas lights in their dark and frigid home.

By 2023, the listless family is bundled up in coats and scarves for a Christmas dinner of watery soup. When the horrified father pulls the hamster’s red ribbon out of his mouth, the mother shushes him to keep their child from learning that her beloved pet has become the holiday meal.

“Merry ‘anti-Russian’ Christmas!” reads the ad’s closing message. “If your media doesn’t tell you where this is all going, RT is available.”

The European Union banned RT from broadcasting in its member countries in March, soon after Vladimir Putin sent troops into Ukraine — but its programs can still be found online.

Viewers rolled their eyes at the clunky piece of propaganda.

“I’m sure these predictions are very accurate,” posted a Twitter user under the handle Lesion Heir. “Incidentally, it has been 302 days since Putin believed they’d take Kyiv in 2 days.” 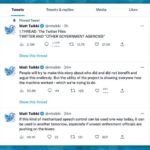