Dayton Police Officer George Kloos and two of his colleagues responded about 2:30 p.m. Oct. 13 to a home on Bancroft Street, where they tried to persuade Tyler Patrick, 29, to go to a hospital with them, WHIO reported.

Patrick’s mother had called 911 to report that he was being “delusional,” police Lt. Col. Eric Henderson said.

About 15 minutes after the cops arrived, her son swung a concealed knife at Kloos and stabbed him in the neck, according to an affidavit cited by the outlet.

Patrick then tried to stab officers James West and Eric Hamby as they tackled him onto a couch and wrestled the knife out of his hand, police said.

Kloos, a 10-year veteran of the force, was rushed to a hospital and was released later in the day.

“The officer was stabbed in the neck and we are fortunate a major artery was not struck,” police said in a statement to WHIO.

Patrick was treated for minor injuries and booked in the Montgomery County Jail on three counts of felonious assault of a peace officer.

Maj. Jason Hall, commander of patrol operations, said the three officers had used an “abundance of de-escalation techniques” during the call. 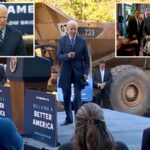 Biden looks confused as he struggles to exit stage at rally 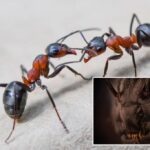