A veteran took down a knife-wielding man who was threatening employees and shoppers at a South Carolina Walmart last Wednesday, video of the incident shows.

The man was shouting and waving around a pocket knife inside the store in the city of Columbia, threatening to cut people with the blade, witnesses and the Richland County Sheriff’s Department told Fox News.

Demario Davis, a veteran who was shopping with his son, spotted the crazed man and waited for his moment to intervene, he told the outlet.

“I was at the checkout when my son noticed the guy walk in with the knife open,” he said. “He then proceeded to the service desk waving the knife at a few female employees.”

He said the knifeman yelled “when the cops get here, I’m going to start cutting you all up.”

Davis said he watched another customer try to stop the man, but he tried to cut him in the face.

“That’s when my military training kicked in and I casually walked over to the object not only to take him down but also protect myself in case I failed, but with my great military training I was able to neutralize the threat until law enforcement arrived,” Davis told Fox News.

Video shows Davis grabbing a stanchion and whacking the man over the head from behind. The man falls to the ground, dropping the knife and another customer stands over him and quickly scoops it up.

The customers held the knifeman down until deputies arrived.

The sheriff’s office said the man was taken to a hospital for evaluation. 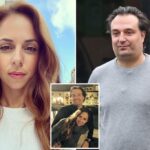 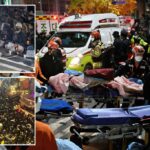