Three University of Southern California, or USC, students filed a lawsuit against the school and a publicly traded company for defrauding students by misleading the U.S. News and World Report rankings of the Rossier School of Education.

The lawsuit was filed by the National Student Legal Defense Network and Tycko & Zavareei LLP on behalf of three named students and additional students who were defrauded, according to a press release.

“Earlier this year, USC came under intense scrutiny after the university released a report describing how the dean of the Rossier School of Education directed administrators to intentionally withhold information from U.S. News & World Report to improve its ranking,” the release read. “USC withdrew Rossier from the annual evaluations following the report, citing ‘a history of inaccuracies.’”

The plaintiffs allege that USC and 2U, Inc. used “doctored” U.S. News rankings which only reflected one in-person program, to entice students to enroll in the university’s online programs.

The only time USC appeared on the ranking of online education graduate programs was in 2013, when it ranked 44th, the release stated.

The suit alleges that the USC Rossier School of Education’s Dean said its online doctoral degree program would cause the school to “drop like a rock” in the U.S. News rankings. But despite that information, USC and 2U continued to promote the in-person rankings when it advertised the online programs through targeted online advertising and other means, to potential students to get more students enrolled in the online program.

The publicly traded online program management company 2U assumed responsibility for recruiting the students, the lawsuit alleges, and “was paid a substantial percentage of tuition.”

University officials would not comment on the matter, as they had not received the official complaint as of Tuesday.

“It’s not hard to see the throughline here — USC intentionally falsified data to inflate their U.S. News ranking, and 2U used the false numbers to pad their profits,” Student Defense Litigation Director Eric Rothschild said. “Both USC and 2U’s actions have hurt countless students who thought this data would help them make an informed enrollment decision. Instead, they were lured into a manufactured profit-making scheme at the expense of their financial and educational futures.” 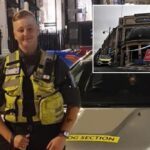 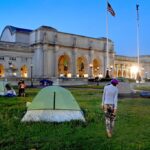