Sullivan was not asked about and did not address the case of American Marc Fogel — who like Whelan was left behind last week when President Biden signed off on a prisoner swap in which the US released convicted arms trafficker Viktor Bout in exchange for basketball player Brittney Griner.

Bout, 55, was found guilty in 2011 of crimes including supporting terrorists and conspiring to kill Americans, and was serving a 25-year sentence. He was nabbed for conspiracy to sell anti-aircraft missiles to Colombia’s FARC rebels after a career of arming other notorious movements around the world.

Sullivan declined to say if he considered Bout to be a “terrorist” when asked point-blank Monday.

“He’s not listed as a specially designated national. What we consider him to have been was a convicted criminal — convicted of arms trafficking and other crimes,” he said.

Whelan, 52, was arrested in Russia in 2018 and ultimately sentenced to 16 years in prison for espionage. His defense attorney said Whelan was apprehended with a thumb drive that purportedly contained Russian “state secrets,” though he had been told it only contained pictures of churches.

Fogel, 61, was arrested in August 2021 for possessing 17 grams of what he said was medical marijuana. The former history teacher, like Griner, was arrested in Moscow when the pot was found in his luggage.

Fogel was sentenced to 14 years in prison in June — just over a month before Griner was handed a nine-year sentence after she pleaded guilty to traveling with a small amount of cannabis oil.

The US government asked for Fogel to be released on humanitarian grounds, CNN reported in August, but Washington reportedly did not include him in a proposed prisoner swap involving Griner and Whelan. 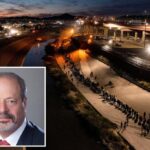 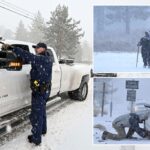 US braces for wild weather week