NEW ORLEANS — A Trump administration ban on bump stocks — devices that enable a shooter to rapidly fire multiple rounds from semi-automatic weapons after an initial trigger pull — was struck down Friday by a federal appeals court in New Orleans.

The ban was instituted after a sniper using bump stock-equipped weapons massacred dozens of people in Las Vegas in 2017. Gun rights advocates have challenged it in multiple courts. The 13-3 ruling at the 5th U.S. Circuit Court of appeals is the latest on the issue, which is likely to be decided at the Supreme Court.

It’s a firearm issue that involves not the Second Amendment but the interpretation of federal statutes. Opponents of the ban argued that bump stocks do not fall under the definition of illegal machine guns in federal law. The U.S. Bureau of Alcohol, Tobacco, Firearms and Explosives says they do, a position now being defended by the Biden administration.

The ban had survived challenges at the Cincinnati-based 6th U.S. Circuit Court of Appeals; the Denver-based 10th Circuit; and the federal circuit court in Washington. A panel of three judges at the 5th Circuit also issued a ruling in favor of the ban, upholding a lower court decision by a Texas federal judge. But the full New Orleans-based court voted to reconsider the case. Arguments were heard Sept. 13.

The full appeals court Friday sided with opponents of the ATF rule. They had argued that the trigger itself functions multiple times when a bump stock is used, so therefore bump stock weapons do not qualify as machine guns under federal law. They point to language in the law that defines a machine gun as one that fires multiple times with a “single function of the trigger.”

“A plain reading of the statutory language, paired with close consideration of the mechanics of a semi-automatic firearm, reveals that a bump stock is excluded from the technical definition of ‘machinegun’ set forth in the Gun Control Act and National Firearms Act,” Judge Jennifer Walker Elrod wrote in the lead majority opinion.

Most of the majority also agreed that if the law is ambiguous, it’s up to Congress to address the issue under a court doctrine known as “lenity.”

In a dissent, Judge Stephen Higginson disagreed that bump stocks don’t fall under the federal definition of machine guns. And he wrote that the majority’s interpretation of the lenity principle was too broad. “Under the majority’s rule, the defendant wins by default whenever the government fails to prove that a statute unambiguously criminalizes the defendant’s conduct,” Higginson wrote.

Richard Samp, who argued against the rule on behalf of a Texas gun owner, said he was pleased with Friday’s ruling and had expected it after the September arguments.

An attorney who argued for the government did not immediately respond to a Friday night email request for comment. 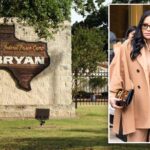 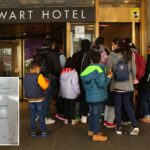 NYC emergency shelters for migrants have no rooms