An Upper West Side synagogue has given the boot to a local Republican club after it scheduled an evening with Dick Morris, a former Bill Clinton advisor who has more recently become a Trumpy political commentator.

The Society for the Advancement of Judaism — a reconstructionist temple whose motto boasts “Judaism that Stands for All — said Morris’ support for former President Trump’s false claim of election theft were too much for their sanctuary to bear.

“The climate in our country has changed since the 2020 election and January 6.  We cannot abide by any speaker in our sacred space whose words amplify and broadcast the anti-democratic ideas of the … insurrectionists, or who condone or incite violence against our elected representatives,” said board chair Janet Brain and Rabbi Lauren Grabelle Herrmann in a statement.

“It’s really a little ridiculous. We have been renting space there since November 2018 and it’s been a super relationship,” said Marcia Drezon-Tepler, president of the West Side Republican Club. “I’m sad because we’ve always had two parties that disagreed without hatred. We number many Democrats who appreciate our openness.”

Morris added that it was “amazing how far liberals will go to avoid hearing the truth.” 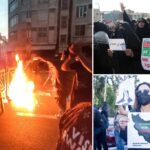