An unfired ammunition round was collected by Georgia investigators from a wooded area near the spot where Debbie Collier’s partially naked and burned body was found earlier this month.

The projectile was found by Fox News Digital on Tuesday 20-30 yards from the crime scene in the Chattahoochee-Oconee National Forest near Athens, Georgia.

Detectives from the Habersham County Sheriff’s Office responded to the scene and picked up the bullet.

They told the news site that while the round could be unrelated to Collier’s murder, it could still be a clue.

Collier, 59, was found dead in a ravine on Sept. 11 after she Venmoed her daughter $2,385 along with a chilling message that read: “they are not going to let me go, love you.”

Investigators later disclosed that Collier’s death was not a suicide, and that there is no evidence to suggest that she had been kidnapped.

They were awaiting the results of Collier’s autopsy to determine how she died.

Earlier this week, surveillance video from a Family Dollar store in Clayton showed Collier looking calm while shopping there for a blue tarp, a lighter, a tote bag and a rain poncho a day before she was found dead.

Two weeks after Collier was discovered with burns on her abdomen, cops still have not named a suspect or a person of interest.

The woman’s daughter, Amanda Bearden, and the daughter’s live-in boyfriend, Andrew Giergerich, who both have a history of domestic violence allegations, told The Post they had been interrogated by detectives and had their phones seized.

On Tuesday, Giergerich told Fox News Digital that he and Bearden were not involved in Collier’s murder, and claimed that they have been living in fear.

“We sleep with stuff in front of our front door and our back door because we didn’t have anything to do with this,” he told the outlet. “We’re a little scared ourselves.”

The Habersham County sheriff is expected to hold a press briefing about the case at 9 a.m. Friday. 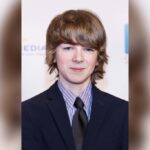 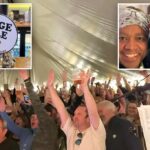 Nigels from across the world gather for ‘Nige-fest’