WASHINGTON — Ukrainian President Volodymyr Zelensky on Wednesday told Congress that thanks to US military aid “Russian tyranny has lost control over us.”

“Against all odds and doom and gloom scenarios, Ukraine didn’t fall. Ukraine is alive and kicking,” the 44-year-old leader said in an English-language speech after a rousing and bipartisan standing ovation when he walked in.

“Next year will be turning point. I know it — the point when Ukrainian courage and American resolve must guarantee the future of our common freedom,” the Churchillian leader told the House and senate members.

Zelensky spoke after meeting with President Biden at the White House and then co-hosting a press conference with the US leader.

“We defeated Russia in the battle for the minds of the world…. Americans gained this victory and that’s why you have succeeded in uniting the global community to protect freedom and international law,” Zelensky told Congress.

“The Russian tyranny has lost control over us,” he triumphantly declared.

Zelensky spoke with House Speaker Nancy Pelosi and Vice President Kamala Harris standing behind him and he specifically turned to Pelosi to say, “you bravely visited Ukraine during the full-fledged war, thank you.”

The Ukrainian leader spoke of the international consequences of the war and said Russian President Vladimir Putin could even lose power inside Russia.

“The Russians will stand a chance to be free only when they defeat the Kremlin in their minds,” he said.

Zelensky spoke as a long-shot revolt by House conservatives poses a roadbump to a further $45 billion in Ukraine aid included in a $1.7 trillion spending bill, which much pass by Friday to avoid a partial government shutdown.

Congress approved $40 billion in Ukraine war aid in May, but fiscal hawks have expressed concern about a continue blank check. 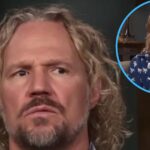 Sister Wives’ Gwendlyn Says Kody’s ‘Getting Better’ As a Dad

Does Kody Have a New Wife? Theories, Details