Two 16-year-old boys were stabbed to death in Greenwich, Englan, just one mile from one another Saturday night, the latest in a violent rash sweeping through the city.

“Given the proximity in time and distance of the incidents, officers will be seeking to urgently establish any link between them,” the Met said.

At least four others were stabbed across the city in November, with two succumbing to their injuries.

Keisha Christodoulou, 32, was stabbed to death inside ar Tanner’s Hill home on the first day of the month. Police believe 33-year-old Leon Murray killed her and that the two had known one another before the stabbing.

Three teenagers were arrested for the fatal stabbing of Gabriel Petrov Stoyanov, 21, on Bromley Road Nov. 4. George David, 16, went on the lam, but was arrested several weeks later along with two unnamed 14- and 17-year-old boys.

Two men were charged after a man in his 40s was stabbed in Queen’s Road, Twickenham on Nov. 18. The victim was taken to the hospital and his condition was assessed as not life-threatening.

The next day, a man in his 20s was stabbed in the leg at the junction of Lion Road and Bexleyheath Broadway in Bexleyheath. Two men, aged 24 and 25, were arrested in connection to the crime. 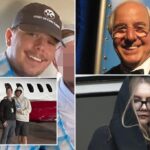 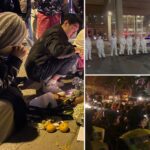