A father and son out fishing off the Jersey Shore got the shock of a lifetime – and it wasn’t reeling in a huge catch.

Zach Piller and his dad had a close call with an enormous humpback whale last week when the ocean creature brushed up against their boat where the two had set sail to fish for bass.

“Oh sh–! Oh sh–! oh sh–!” Piller screamed as the massive marine mammal emerged from the water, according to video he captured of the moment.

Their boat could be seen swaying back and forth during the wild encounter on Wednesday.

The Pillers had spotted sharks and dolphins earlier in the day — and got footage of the whale after Zach started recording his old man reeling in a catch.

Dad Doug Piller can be seen holding his fishing rod tightly in the immediate aftermath of the incredible spectacle.

Piller held onto the fish and “wasn’t fazed at all,” his son told Storyful. Neither was injured.

Anglers aren’t allowed within 100 yards of a whale, but when a whale approaches their boat, they should put the engine in neutral until the whale goes by, according to the Asbury Park Press, citing the NOAA.

Humpback whales can weigh up to 40 tons, according to the NOAA. 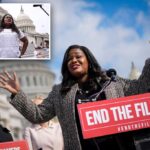 Rep. Cori Bush spent $500K in campaign cash on security while calling to defund the police 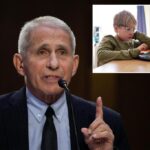