Two former Kansas City police officers pleaded guilty on Monday to using excessive force when they slammed a transgender woman’s face into the ground during an arrest in 2019.

Matthew G. Brummett and Charles Prichard had each been charged with felony third-degree assault for “recklessly causing pain” to Breona Hill as she was being handcuffed on May 24, 2019.

Outside of the courtroom Monday, Roderick Reed, who recorded the assault, told The Kansas City Star he doesn’t think the officers would have been prosecuted had he not been there to film the arrest.

“It was well overdue,” he said of the cops’ convictions.

Neither officer will face any jail time. They were sentenced to three years of probation and were forced to surrender their police certifications and are barred from carrying firearms, The Kansas City Star reported.

The officers had responded to a disturbance at a beauty supply store after the owner called to have Hill removed from the building. When they went to arrest Hill, who was standing outside, a  passerby captured a disturbing video of the officers slamming Hill’s face to the pavement and placing one of their knees on her neck.

“God help me,” Hill cried out, according to court records.

On Oct. 14, 2019, five months after her arrest, Hill was shot and killed outside her home in an unrelated incident. She was 30 years old.

David Smith, an attorney representing Rena Childs, Hill’s aunt, read a statement to the court on Monday that said Hill’s “goodness shined through,” during her struggles with her gender identity.

“Today is starting to smell like justice,” Smith said, while accusing the KCPD of engaging in a coverup.

Gwen Grant, president and CEO of the Urban League of Greater Kansas City, told the Star in a statement that although they are disappointed the officers will not serve any jail time, “acknowledgment of guilt and being barred from careers in law enforcement can serve as signals to officers on the force that perhaps the two-tiered justice system that they have long enjoyed may be coming to an end.”

According to the Star, Brummett and Prichard — who each had been accused of excessive force in two other incidents — left the department last December under unclear circumstances.

Jackson County Prosecutor Jean Peters Baker said the conviction proves “that nobody, nobody is above the rule of law,” noting that Hill, as a Black transgender woman, was part of a vulnerable community, Baker said.

“I think far too often, people like Breona see the system actually working against them instead of for them. So I’m standing here. I wish she could be here today … She deserved the protections of the system and she deserved fair and just treatment,” she said.

Interim Kansas City Police Chief Joe Mabin said in a statement that he expects his “officers to treat all those they come into contact with on a daily basis with dignity and respect. The officers’ actions that day did not meet those expectations. They were unacceptable, will not be condoned, and will not be tolerated.” 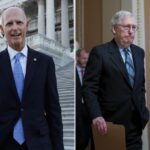 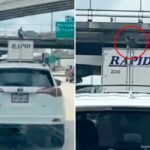