His legacy. Stephen Boss, known as DJ tWitch, and his wife, Allison Holker, had many family moments with their kids before his tragic death at age 40.

Holker confirmed his passing one day later, remembering her husband’s “positive impact” and the enormous “legacy” he left behind for their three kids, son Maddox, daughter, Zaia, and Boss’ stepdaughter, Weslie Fowler.

“Stephen lit up every room he stepped into,” the professional dancer said in a statement to People. “He valued family, friends and community above all else and leading with love and light was everything to him. He was the backbone of our family, the best husband and father, and an inspiration to his fans.”

Holker added that they will “honor his memory” daily before ending her statement with a message directed toward her late spouse, “We love you, we miss you and I will always save the last dance for you.”

Boss and Holker met while competing as all-stars during season 7 of So You Think You Can Dance. The DJ previously joked that he was initially “oblivious” to his wife’s advances because she’s such a kind person.

“I’m not going to be like, ‘Oh, she’s feeling me,” he explained during an appearance on The Jennifer Hudson Show in November.

“I was out there making all these moves and it took him a second to see them,” Holker jokingly recalled. “But once he did, we locked them in.”

The pair got married in 2013 and welcomed their son in 2016 followed by daughter Zaia in 2019. As for Weslie, Holker gave birth to the teen in 2008 while during a prior relationship. Boss had since adopted his stepdaughter.

While Boss and Holker had successful careers on their own, they became well-known for their joint dance videos on social media.

Fans loved watching their chemistry, and Holker previously acknowledged that dance was a way for them to “reconnect” as a couple.

“People always ask about our relationship. We have dance, and that is like our home,” she told Entertainment Tonight in 2021, noting that it helped them “find each other” during life’s hectic moments. “So I think it’s something that we really share as a couple, that honestly is just like a dream to me.”

Keep scrolling to look back at DJ tWitch’s family photos with Allison Holker and their kids. 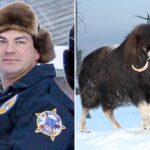 Alaska officer killed by muskox while protecting his dogs