WASHINGTON – The Trump Organization charged the Secret Service hundreds or thousands of dollars above the government rate for stays at its hotels while protecting the 45th president and his family members on dozens of trips, according to receipts released Monday in a report by the House Oversight Committee.

Committee Chair Rep. Carolyn Maloney (D-NY) accused Trump of profiting off taxpayer funds by lodging agents in his eponymous hotels at rates “as high as $1,185 per night,” in a letter to Secret Service director Kimberly Cheatle revealing the findings.

“The exorbitant rates charged to the Secret Service and agents’ frequent stays at Trump-owned properties raise significant concerns about the former President’s self-dealing and may have resulted in a taxpayer-funded windfall for former President Trump’s struggling businesses,” Maloney said.

Government rates refer to the maximum amount federal employees can spend on hotels for work purposes and are based on the average hotel rate for a given area during a certain time of year. Expenses that rise above that threshold are typically subjected to additional scrutiny, but the Trump administration in early 2017 gave the Secret Service additional flexibility for such costs if incurred during protective missions.

“Records show the Secret Service spent more than $1.4 million on lodging at Trump-owned properties in the United States from January 20, 2017, through September 15, 2021,” Maloney said. “This figure does not appear to account for all Secret Service payments to Trump properties and the committee is continuing to seek a full accounting of this spending.”

“If my father travels, they stay at our properties for free,” Eric Trump told Yahoo Finance in 2019. “So everywhere that he goes, if he stays at one of his places, the government actually … saves a fortune because if they were to go to a hotel across the street, they’d be charging them $500 a night, whereas, you know, we charge them like $50.”

But Secret Service records obtained by the committee revealed the agency was charged rates far above the government per diem amount at least 40 times between Jan. 20, 2017 and Sept. 15, 2021, according to the report.

For example, Trump International Hotel Washington DC charged agents $1,160 per night for a room while protecting Eric Trump during his stay on March 8, 2017. The government rate at the time was $242, according to receipts released in the report.

In another instance, the Trump Organization charged the government $1,185 per night to stay at the DC hotel while protecting the former president’s other son, Donald Trump Jr., on Nov. 8, 2017. At the time, the government rate was $201.

“In addition, records show that on at least six occasions when former President Trump stayed at his Mar-a-Lago Club, the property charged his Secret Service detail nightly rates that were nearly double the government per diem rate, including a nearly month-long stay where ‘the government rate could not be negotiated for this purpose,’ according to Secret Service records,” Maloney said.

The findings represent just a fraction of the full amount of Secret Service expenses at Trump properties during the former president’s term, which the committee has been seeking for more than two years.

The Secret Service also stayed at Trump properties while protecting other individuals, such as foreign leaders.

“Whenever the Secret Service purchased hotel rooms at these properties, the Trump Organization – and its owner, Donald Trump – were paid using taxpayer funds,” she wrote.

The committee will seek additional documents the Secret Service has so far declined to provide so it can “determine the full amount of taxpayer money the Secret Service spent at properties owned by the former President,” according to Maloney.

“Given the longstanding concerns surrounding the former President’s conflicts of interest and efforts to profit off the presidency, the Committee has a strong interest in obtaining a complete accounting of federal government spending at Trump properties,” she wrote.

The committee in its letter asked the agency to identify all Secret Service stays at Trump hotels, the total expenses and nightly rate paid during each stay, and provide “all internal documents, communications, memoranda, or analyses” related to each stay that rose above the government rate by Oct. 31.

“The Committee continues to examine potential legislation to prevent presidential self-dealing and profiteering, as well as to curb conflicts of interest by ensuring that future presidents are prevented from exercising undue influence on Secret Service spending,” Maloney said. 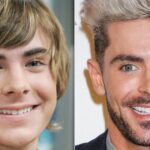 From Disney Channel Star to Now