A tourist in Bali has survived a massive cliffside fall after attempting a somersault.

The man had been posing for photos at the edge of the cliff while in Nusa Penida before attempting a flip and landing some 130 feet below.

Police said a tour guide was taking photos of the man at the popular tourist destination before his stunt backfired.

Local media reported that emergency services were called but were hindered by the dangerous terrain surrounding the cliff.

Nusa Penida Search and Rescue Alert Unit said operators attempted reaching the man by boat but were blocked by waves.

Head of Bali Basarnas Office Gede Darmada said one rescuer was able to drop down from the cliffside and stretcher the man out.

“We received information at around 10.00 WITA. The eyewitness was a tour guide. The victim is said to have taken a photo doing some flips,” he said, via local publication Detik Bali.

“We gave initial treatment to reduce bleeding from leg and hand injuries,” he said

“The victim was pulled up using a stretcher.”

The man was taken to hospital suffering serious leg injuries.

“He fell from there,” a man’s voice can be heard in a video filming the aftermath.

“He’s broken his leg and his arm and how the f–k he survived, I can’t tell you.”

The incident came four days after an American tourist died while on holiday in Indonesia.

The 35-year-old woman fell from the side of an infinity pool while trying to walk around another part of the structure, local media reported.

The woman reportedly fell a height of 15m and landed in a pond below. Hotel staff and guests at The Sankara Suites and Villa immediately rushed to her aid but could not revive her before ambulances arrived. 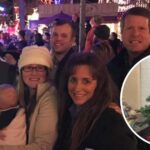 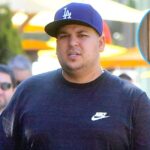