A huge storm battered Texas and Oklahoma over the weekend which spawned nine tornadoes leaving two dead, at least 13 injured and over 150 buildings destroyed or significantly damaged.

Oklahoma Gov. Kevin Stitt confirmed to ABC a 90-year-old man was killed in the storm, which hit four counties, and several others had been injured.

One city in McCurtain County, Idabel, suffered over 100 homes and businesses destroyed, according to the governor, who said he was declaring a state of emergency in to ensure the affected communities got the support they needed.

Emergency management coordinator, Steven Carter, said there had been “total destruction” to the south and east of Idabel, according to the Texarkana Gazette.

The most powerful tornado was categorized as an EF-3 — a strong tornado with wind speeds between 158 and 206 mph — which slammed the town of Powderly in Lamar County, northeast of Dallas.

At least 32 homes were destroyed by the twister, which left a 22-mile path of devastation, according to the National Weather Service.

Video from the storm’s aftermath shows entire neighborhoods flattened like pancakes and residents surveying the damage, according to Dallas’ FOX station.

Wes Brown rode out the storm in an interior closet with his wife and kids.

“The reason we’re alive is because [of] Jesus Christ,” Brown told the network. “He spared us last night,” he told FOX News.

Brown could hear glass breaking as the storm moved over them, but said he had no idea how bad the damage was until he went outside and realized they had lost pretty much every material possession they owned.

“We’re trying to sift through, but it’s things,” Brown said. “I thank God that I have my wife and my children. That’s what’s most important.

Despite the power of the tornado, no one was killed in Powderly.

Seventy miles away in Morris County, Texas, Judge Doug Reeder confirmed a death, but did not give the person’s identity. He added authorities believed three separate tornadoes had passed through the area, two homes had been destroyed and others damaged during the storm.

The Sheriff’s office in Lamar County, Texas confirmed 10 injuries, with two people being in critical condition at local hospitals and 50 local homes or businesses damaged or destroyed.

Two EF-2, tornados — with winds of up to 157 miles an hour– also hit Henderson County and Sulphur Springs, Texas– destroying a wedding venue and damaging a steel company, the National Weather Service said. 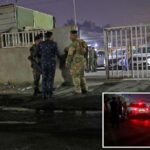 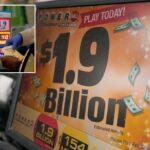