“My kids and grandkids gave me a very special birthday celebration surprise,” Amy, 60, shared via her Instagram Story on Sunday, September 25, over a photo of herself and husband Chris Marek one day after the party. “Perfect birthday with them and Chris.”

The mother of four, who officially turned 60 on September 17, added, “What? Yes, I’m still celebrating and no better way than with Chris and my kids and grandkids.”

Amy’s daughter-in-law Tori, 31, shared a series of photos from the special day to her Instagram Story later that day.

“All the [daughters-in-law] pulled off an awesome surprise for Mimi’s 60th birthday!!” the Oregon native shared. “We love you, [Amy Roloff]!!” she added over a photo of her mother-in-law and her three children.

Tori – who shares sons Jackson and Josiah, as well as daughter Lilah, with husband Zach Roloff – went on to reveal that they “loved getting everyone together.”

“Rallying seven grandkids is no easy task,” she continued, with a photo of Jackson, 5, and niece Ember posing in front of a sparkly pink wall with giant “6” and “0” rose gold balloons.

Sister-in-law Audrey Roloff – who shares daughter Ember and sons Bode and Radley with husband Jeremy Roloff – took to her own account to post a series of photos of all the grandkids having fun, saying, “Surprised Mimi yesterday!”

In addition to Tori and Audrey’s children, Amy’s youngest son Jacob Roloff shares son Mateo with wife Isabel Rock, though they choose to keep their infant off social media.

Noticeably absent from the festivities was Amy’s ex-husband, Matt Roloff, as he and son Zach, 32, have been in an ongoing feud over the sale of their family property, Roloff Farms.

“When Zach and I finally sat down [to discuss him buying the property], we were really in very different camps about what kind of a deal could go on,” Matt, 60, said during a season 22 confessional. “Zach came in real hot. He didn’t come in to negotiate. He came in to demand.”

When the patriarch officially put 16-acres of the family farm on the market in May, he shared a lengthy Instagram post about “keeping the dream alive” which Zach later called “extremely misguided and false.”

While he continues to be at odds with his twin sons and his ex-wife, Matt seems to have come to terms with his decision, later saying, “Letting go, it’s part of life.” 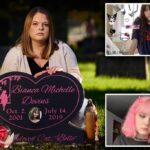 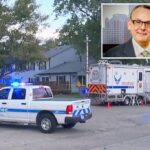