A long time coming. T.J. Holmes and Marilee Fiebig have filed for divorce after 12 years of marriage, In Touch can confirm. The Good Morning America cohost, 45, and the immigration lawyer, 45, got married in 2010.

It marked the second marriage for T.J. and the first for Marilee, who has an impressive career stemming from her time at Vanderbilt University Law School. The former CNN personality was previously married to Amy Ferson until their divorce in 2007. They share a daughter, Brianna, and son, Jaiden. T.J. and Marilee welcomed their daughter and only child together, Sabine, in January 2013.

The high profile divorce comes amid romance rumors swirling around T.J. and his Good Morning America cohost, Amy Robach. After PDA-packed photos were released of the on-camera duo during a handful of outings in November 2022, speculation about their off-camera dynamic spread rampantly.

The photos, initially released by the Daily Mail on Wednesday, November 30, showed T.J. placing his hand on Amy’s buttocks as she loaded items into the trunk of a vehicle. In another snap, the coworkers were spotted holding hands in the back of an Uber.

In the hours that followed the breaking news, Amy deleted her Instagram page and T.J. maintained his silence, with multiple sources telling In Touch exclusively that ABC – the network behind Good Morning America – was desperately trying to “figure out how to handle” the rumors, calling the situation “an HR nightmare.”

Despite the controversy, both Amy and T.J. appeared on Good Morning America on December 1, just one day after the salacious photos were released. They have since been taken off the air and were spotted getting cozy as recently as Monday, December 26.

“10 years ago, Marilee Fiebig married me. And despite my best efforts, she remained married to me the past 10 years,” T.J. wrote in the now-viral post. “I gave her plenty of reasons, excuses, and opportunities to walk her fine ass out the [door].”

Reps for T.J. and Marilee did not immediately respond to In Touch’s request for comment. 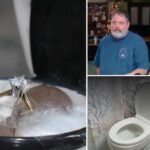 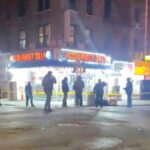