Fans met Tinder Swindler victim Pernilla Sjoholm after the 2022 film’s release. Less than one year after the documentary’s premiere, Pernilla is growing a family of her own and opens up about her life today in an exclusive video interview with In Touch. Keep reading to find out what she’s up to now!

After losing Shimon Hayut, whose former name was Simon Leviev, as a friend, Pernilla gained a lover. She met her current boyfriend through a “common friend” who “set them up,” she tells In Touch. Their whirlwind romance reached its next step as the Sweden native is pregnant and expecting twins!

“I’m very excited and I just found out the other day that it’s gonna be a little girl and a little boy, so I feel so blessed. Really,” she gushes. While sharing her joy about her little ones she adds, “It’s a very heavy pregnancy. It’s very hard. It’s difficult. I salute women doing this multiple times.”

As seen in the Tinder Swindler, Shimon claimed to be the heir of Leviev Diamonds. However, Shimon has no affiliation with the jewelry company or the family that runs the business. Now, Pernilla has partnered with the brand and created a bracelet with a special meaning.

“We designed all of us together a bracelet that says ‘Stronger Together,’ which means that you are not alone, that you always are stronger together with other people because with everything that we went through, none of us could have done it alone,” she explains. “It was a chain of reactions and everything, and it means so much to have someone by your side when you going through difficulties in life.”

Has Pernilla Talked to the Tinder Swindler After the Documentary Released?

According to Pernilla, the last conversation she had with Shimon was their final phone conversation featured in the film.

“[I] have not spoken to him and I have no necessary to do so whatsoever. For me, it feels like a friend who died, because the person I know didn’t exist,” she admits. “I sort of feel like I’m going on the next chapter in my life. I’m moving on. I wanna focus on positive things as well and try to do good and support people who are in similar situations and everything as well. I don’t wanna focus on him.”

Pernilla and Cecilie, who dated Shimon, instantly connected after being conned out of thousands of dollars. The pair even starred in the commercial for the dating app Wingman and Pernilla deems her as her “best friend.”

“We always make this joke today, like, ‘Oh, he can’t put the price on friendship.’ And we are like, ‘Oh, we can,’” Pernilla jokes. “We have really bonded, like very, very strong. And it’s been since the beginning of 2019 since we first met. So I did lose one best friend, but I did gain another.” 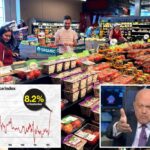 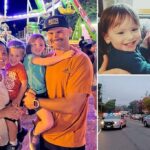 Fallen Bristol officer Dustin DeMonte had a baby on the way