A few days ago, Andrew Luck, the 29-year-old starting quarterback for the Indianapolis Colts, shocked the NFL by deciding to abruptly retire. When Luck first entered the NFL as the number one overall pick of the Colts, he was seen as a generational talent who could succeed Peyton Manning and help lead the team back to the playoffs. Andrew Luck’s early retirement is just the latest example of an NFL player bowing out of the league earlier than expected due to the severe physical toll that one experiences playing football. In the first few years of Luck’s career, the Colts failed to provide him with a decent offensive line. Unblocked defenders thus were able to get constant bone-rattling hits causing Luck to develop a harrowing injury history. Given  this list of injuries, along with the fact that he has a Stanford degree and has made a whole lot of money in his career, makes his tough decision seem a little simpler. Football players put their bodies on the line every game in order to wow the fans and help their team win the game. However, at some point as Luck realized, your health is more important than your job. The Colts fans did not seem to realize that as they booed him walking off the field for the final time.

The brutality of football is also noted in the fact that running backs have an average shelf life of three years largely because of how many times each game they get tackled by 200-350 lb men while running the ball. This often leads to injuries that can cause a decline in their strength and speed, which are the two most important attributes for a running back.  Tight end Rob Gronkowski, who retired following his Patriots’ Super Bowl win earlier this year, also came forward today saying that he had to have a liter of blood drained from his quad as a result of a hit he took in the Super Bowl. He, like many other NFL players, was able to make a mega impact on the game despite numerous injuries suffered. The fact that concussions are up, CTE has been discovered to be real, and youth participation in tackle football is down does not bode well for the future of one of the most popular sports in America. 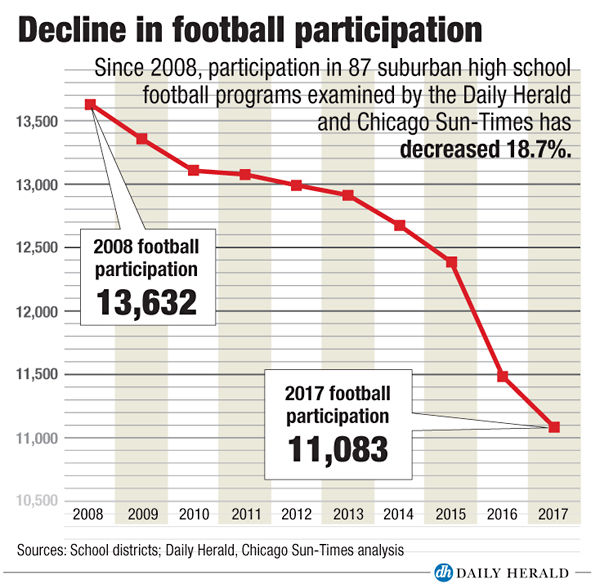