A major winter storm will produce damaging winds and snow in many locations this week, and with the Christmas holiday travel season in full effect, the timing couldn’t be worse.

The massive winter storm will impact tens of millions of Americans across the Midwest, Great Lakes and Northeast starting on Wednesday, with the peak impacts expected from Thursday through early Saturday (Christmas Eve).

Blizzard conditions are expected in parts of the Midwest and Great Lakes on Thursday and Friday, leading to devastating impacts on holiday travel, including prolonged flight delays or numerous cancellations.

Airlines have started doing whatever they can in anticipation of the major winter storm brewing for later this week.

And with flight delays and cancellations likely to increase in the Midwest and around the Great Lakes, it will have a ripple effect across the country.

Because of the country’s geography, major cities such as New York City, Boston, Miami and Los Angeles can have a beautiful, sunny day, yet winter weather in places like Chicago and Detroit can keep planes grounded and prevent them from getting to other major airports.

Be aware: Just because airlines are preparing for the worst with this incoming high-impact winter storm, that doesn’t mean you shouldn’t make preparations on your end.

“So, the airlines, a lot of the times, put change waivers into effect,” Slotnick said. “That mean’s there’s no fare difference if you need to move your flight.”

Slotnick said the best thing you can do if you’re flying over the Christmas holiday is to do it sooner rather than later.

“You know, head out Tuesday or Wednesday instead of Thursday or Friday,” he said. “You know, just having fewer people, having that travel kind of spaced out, that really makes a big difference. And that helps.”

But if you don’t have the flexibility of changing your flight to leave early, you’ll want to keep an eye on your reservation.

“You know, you might see a proactive cancellation or a proactive delay or flight change,” Slotnick said. “And you might be able to deal with that yourself at home through the app. You might be able to avoid a long line at the airport. It’s really just a matter of sort of taking control into your own hands and sort of waiting really for the last minute at the airport.”

It’s frustrating if you’re already at the airport when an issue, like this major winter storm in the Midwest and Great Lakes, forces an airline to cancel or delay a flight.

But you have options.

“You’re empowered a lot these days through the airline app,” Slotnick said. “So, you can change a lot by yourself once you’re delayed. A lot of the times (airlines) end up waiving a lot of the cancellation fees or penalties or anything like that.”

So if you find yourself in that situation, save the stress by skipping the ticket counter and opening your airline’s app.

“See if there’s anything you can do first,” Slotnick said. “It really, that’s just the best way to make sure you can avoid the worst of a situation.”

Several airports in the Midwest and around the Great Lakes will see delays and cancellations due to the impacts of this impending winter storm.

The following is a list of major airports in the region, but that doesn’t necessarily mean there will be significant flight delays or cancellations.

As always, contact your airline directly for information on any possible issues with your flight before heading to the airport.

As Slotnick stated, many airlines will offer to waive fees associated with changing or canceling a flight when a major winter storm, like the one headed to parts of the Midwest and Great Lakes later this week, is predicted.

So far, six major airlines have started to issue travel advisories and will waive some associated fees.

American Airlines has issued a travel alert for several destinations across the Midwest. Some locations are Des Moines, Iowa, Green Bay, Wisconsin, Kansas City, Missouri, Chicago O’Hare and many others.

United Airlines has also announced it will waive fees for passengers traveling to or from dozens of airports across the Midwest in advance of the impending winter storm.

On Monday afternoon, Southwest Airlines was the most recent airline to announce it would waive fees associated with changing flights because of the winter storm.

So far, 12 airports in the Midwest are included, so check out their website for the most current information.

Because of the winter storm, JetBlue has announced it will waive change and cancel fees and fare differences for customers traveling on Wednesday, December 21 through Friday, December 23 to and from Chicago (ORD), Kansas City (MCI), Milwaukee (MKE) and Minneapolis/St. Paul (MSP).

Delta Airlines announced on Tuesday that it, too, would waive some fees associated with changing flights ahead of the winter storm and life-threatening cold.

Airports from across the country are included from Seattle (SEA) and Billings, Montana (BIL) in the West to Boston (BOS), Hartford, Connecticut (BDL), New York City (JFK, LGA, EWR), Philadelphia (PHL) and Washington, D.C. (DCA, IAD) in the East.

Because of snow in the Seattle area, Alaska Airlines is also providing assistance to passengers who may encounter delayed or canceled flights because of the Christmas week blizzard. 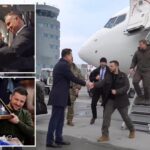