A Texas state trooper who was one of the first to respond to the school shooting at Robb Elementary School in Uvalde has been fired by the Texas Department of Public Safety, officials confirmed.

Sgt. Juan Maldonado, a public information officer, was one of seven Texas troopers who were investigated by the DPS inspector general for their inaction during the May 24 massacre that left 19 students and two teachers dead, the agency confirmed to the Post.

He was canned on Friday.

In September, DPS announced that five of its officers who responded to the shooting had been referred to the inspector general. The number was later increased to seven officers.

Maldonado, who’s been on the force for 23 years, was accused of not following active shooter protocol during the slaughter, an official familiar with the matter told ABC News.

He is the first DPS officer to be disciplined in the inspector general’s probe.

Over 370 law enforcement officers from various agencies responded to the school, including 91 DPS officers. Despite the massive response, it took over 70 minutes for police to breach the classroom and take out the gunman — 18-year-old Salvador Ramos.

During the shooting, Maldonado was seen on security camera footage holding the school door open, ABC reported. Video shows him standing idly as another officer sprints out of the building covered in blood, pleading for other officers to go in.

Earlier this month, Uvalde school officials fired a newly hired district cop after a CNN report revealed Crimson Elizondo, who was also among the first Texas Department of Public Safety officers who arrived at the scene, also failed to take proper action. 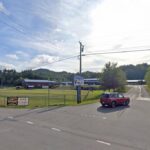 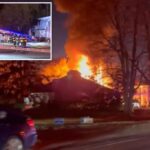 New Hampshire apartment building struck by plane, killing all onboard