A Tesla was burnt beyond recognition Tuesday after a large piece of debris became lodged underneath the car on a Pennsylvania highway.

Local outlets report a family en route to visit a relative in Massachusetts pulled over on Interstate 80 when their Tesla Model S started smoking, according to WTAJ.

The Morris Township Volunteer Fire Department battled the fierce flames and smoke for two hours due to the Tesla’s lithium-ion battery.

The department estimated around 12,000 gallons of water was used to extinguish the flames that consumed the vehicle.

The family’s dog was also in the car but managed to escape safely.

Photos of the destructive aftermath show the popular vehicle to its tires, outer frame and a pile of metal.

“This vehicle burnt so hot and long that if it was not for the rims you might not even of know it was a vehicle,” the fire department said. 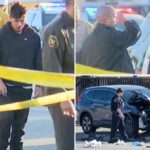 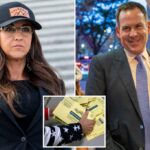