A convicted killer who gunned down a retired St. Louis police captain during a night of looting and unrest in 2020 was sentenced Wednesday to life in prison.

Stephan Cannon, who was found guilty of murdering David Dorn, received a mandatory life sentence on top of another 30 years for other crimes he was convicted of last July.

Dorn, 77, attempted to stop lawlessness at this friend’s pawn shop in the Missouri city on June, 2, 2020 as violence was mixed in with raging racial justice protests in the wake of the murder of George Floyd in Minneapolis.

As Dorn approached the business, Cannon, 26, fired ten shots at him.

“He was murdered by the same type of gentleman my father tried to set an example for his entire life,” one of his daughters, Lisa Dorn, said in court, according to the St. Louis Post-Dispatch.

“Our father was a good cop, but more importantly, he was a good man.”

Cannon denied shooting Dorn Wednesday even as he apologized to the family for their loss.

His defense team planned to appeal.

Cannon was convicted of first-degree murder, robbery, burglary, and three counts of armed criminal action in July after prosecutors presented evidence that included surveillance footage, witness testimony and a Facebook livestream that showed Dorn dying on the sidewalk, the newspaper reported.

The defense argued there was a lack of physical evidence and claimed a top witness for the prosecutors was not credible.

The same night Dorn was gunned down, four other officers were shot while other cops were hit with rocks and fireworks as dozens of businesses were looted.

Dorn served with St. Louis police for 38 years before he retired in 2007.

His family said they were happy to see “justice was served,” the St. Louis Post-Dispatch reported.

“I just hope you turn it around,” Dorn’s son Brian Powell reportedly told Cannon at the hearing. “You got time, young man.” 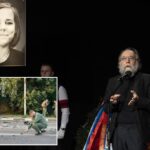 Sister Wives’ Kody in a ‘Delusional World’ Amid Christine Split