A South Carolina woman is facing attempted murder charges after she allegedly tried to mow down a man with a minivan following an argument at a Waffle House.

Shatarica Michelle Unique Gray, 35, got into a heated confrontation with a security guard at the chain breakfast restaurant and tried to run him over before fleeing around 3 a.m. on Oct. 30, Sumter police alleged.

Gray hopped into the minivan and allegedly slammed on the gas while driving in the direction of the male guard, only to miss and crash into another car with passengers inside, police said, citing witnesses.

She then struck multiple other parked cars and then drove off, abandoning the minivan in the woods, cops alleged.

One person was injured during the melee and taken to Prisma Health Tuomey where they were treated and released. It’s unclear who the victim was.

In a twist of fate, officers who were at the hospital checking on the victim spotted a woman – who matched the description of the suspect – walk into the same hospital.

Gray went to Prisma Healthy Tuomey for a minor injury, was treated and subsequently cuffed at the hospital and taken into police custody, according to cops.

She was charged with attempted murder, assault and battery of a high and aggravated nature, driving under suspension and leaving the scene of an accident with injuries.

She is being held at the local detention center, police said. 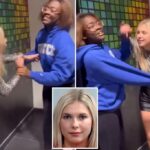 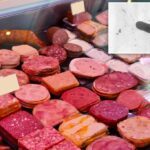 More than a dozen sickened from Listeria outbreak: CDC