Accumulating snow will break out across the Northeast on Sunday and continue into Monday as a fast-moving system swings through the region and an area of low pressure tries forming off the East Coast.

Much of the Interstate 95 corridor has yet to pick up measurable snowfall this season. While the majority of this snow will remain confined to the interior Northeast, the FOX Forecast Center can’t rule out some snow trying to sneak into a few of the larger cities.

Winter Weather Advisories have been issued into Monday morning for parts of central and upstate New York, northeastern Pennsylvania, northwestern New Jersey, northwestern Connecticut and western Massachusetts. This is where the snow has the highest potential to stick to the roads and create slippery travel conditions.

You can see on the FOX Weather FutureTrack below that the rain/snow line on Sunday will most likely set up north of the Big Apple, though it could be snowing as nearby as northwestern New Jersey, western Connecticut and the lower and mid-Hudson Valley of New York.

Between 1 and 3 inches of snow is expected into Monday across much of the interior Northeast, including New York state, northern Pennsylvania, far northern New Jersey and a large swath of New England.

The higher elevations in the Catskills of New York and the Berkshires of western Massachusetts will likely pick up 3 to 6 inches of snow, but localized totals of up to 10 inches are not ruled out in the highest mountains.

Closer to I-95, but north of New York City, the precipitation may initially start as rain before changing over to snow Sunday evening. A slushy inch or two is possible in cities like Bridgeport in Connecticut and Providence in Rhode Island, which would be their first measurable snowfall of the season.

“All of this exits early on Monday,” Freeze said. “Wouldn’t be surprised to see a few flurries mixing in on the backside. And also, just because it’s a wet, sloppy rain event, does not mean that you don’t have to watch out for slick conditions early on Monday morning because we will be below freezing in those areas.” 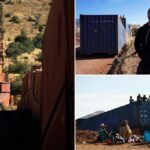