Kody’s call. Sister Wives star Meri Brown “never had the upper hand” in her marriage to Kody Brown before their split, a source exclusively tells In Touch.

“He’s never really had her back,” the insider explains of how Kody, 53, treated Meri, 51. “She should have left him a long time ago, way before the other wives did.”

The source notes that the split was fully the Brown patriarch’s decision. “We all thought Meri was going to hang in there with Kody, and she would have,” the insider shares. But apparently, he’s the one who wants to move on. “

Meri confirmed that they split after 32 years of marriage in a teaser clip from the Sunday, December 18 special Sister Wives: One-on-One, which was shared by People on Thursday, December 15.

The segment began with Meri watching a clip of Kody sharing his candid thoughts on their relationship. “If she wanted to move on and marry another, she wouldn’t get an argument with me,” he said in a confessional.

The TLC personality noted that Kody “led me to believe that he was trying” to work on the problems in their marriage. “You know, our first anniversary that we had here in Flagstaff, it was cheers to a new beginning as opposed to this last anniversary he’s like, ‘I don’t even know why you called me Meri.’ He’s like, ‘We’re not married. We’re not acting as married,’” she added.

When asked where she stands with the father of 18 today, Meri replied, “Well, he’s already made the decision. You just saw him say that.”

While Kody feels that their marriage is over and he’s not “interested” in fixing their issues, Meri said she is willing to work on improving their relationship.

The pair tied the knot in 1990, while they legally divorced in 2014 in order for Kody to marry his fourth wife, Robyn Brown, so that he could adopt her kids from a previous relationship. Despite the legal end to their marriage, Kody and Meri remained spiritually married.

Meri is the third wife to end her marriage with Kody. In November 2021, Christine Brown announced that she had left Kody after more than 25 years of marriage. Just over one year later, In Touch broke the news that Janelle Brown had separated from Kody in December.

Soon after news broke of Janelle, 53, and Kody’s split, a source exclusively told In Touch that Meri had been “calling out” the “red flags” in their marriage.

“She admitted that his treatment of her has been disturbing,” the insider explained at the time, noting that Kody turned “a blind eye” toward his “issues” with her. 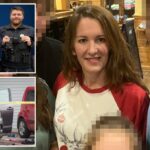 Florida man shoots his way into vape shops before burglarizing them: video