The stars of Sister Wives have had their lives filmed – both the good and the bad moments – for more than a decade, as the show premiered on TLC in 2010. While the earlier seasons of the long-running reality series were a bit less intense, the latter seasons of Sister Wives showed not only the cracks in the Brown family foundation, but the demise of three out of four of Kody Brown’s marriages, leading to estranged relationships with his kids.

In total, the businessman shares 18 children with his three ex-wives, Christine Brown, Janelle Brown and Meri Brown, and only remaining wife, Robyn Brown.

Christine was the first to leave Kody, announcing their decision to end their spiritual marriage of 27 years via a statement shared on Instagram in November 2021. Together they share son Paedon and daughters Ysabel, Aspyn, Gwendlyn, Truely and Mykelti. Out of Kody’s six kids with Christine, Mykelti is one of the only ones who maintains a relationship with the Wyoming native.

“I know he’s gone and visited her several times. She doesn’t really care or get involved with the drama – she’s not into drama,” a source told In Touch of Kody and Mykelti’s relationship in October 2022. “She wants her kids to know the family and she hasn’t had a problem with Robyn. For the others, he hasn’t put in the effort. It’s not because he doesn’t love them; it’s because he’s a narcissist and when he starts feeling attacked, he retreats.”

In December 2022, In Touch exclusively broke the news that Janelle left Kody after nearly 30 years of spiritual marriage. “Janelle is a strong independent woman and realized she can do it on her own,” an insider exclusively told In Touch. The Plexus ambassador also shares six children with the polygamous patriarch: sons Logan, Hunter, Gabe and Garrison and daughters Maddie and Savanah, all of whom are now adults.

One of the storylines of seasons 16 of Sister Wives centered around Kody’s feud with Gabe and Garrison over his strict COVID-19 rules, leading to a non-existent relationship between the Las Vegas resident and his sons. “[We’re] not good. Not talking,” Kody said of them during the season 16 tell-all that aired in February 2022. “It’s like one of those relationships where we’ve gotta do a lot of work.”

Kody married his first wife, Meri, in 1990 but remained spiritually married to her after their legal divorce in 2014. Meri confirmed that she and the TLC personality ended their relationship in January 2023 after months of speculation. “After more than a decade of working on our relationship in our own unique ways, we have made the decision to permanently terminate our marriage relationship,” the pair wrote in a joint statement posted to Instagram. She and her ex share one child together, Leon.

Robyn is Kody’s only remaining wife. The couple spiritually wed in 2010 then legally wed in 2014 in order to adopt her three kids from a previous relationship: son David Dayton and daughters Aurora and Breanna. They share five kids in total, as they welcomed son Solomon in October 2011 and daughter Ariella in January 2016.

While it appears that Kody still has bonds with some of his younger children, a source previously told In Touch that his relationships with many of his older kids are “pretty bad.”

The insider continued, “Kody has damaged his adult children’s relationship with him, except for a few. They want him to publicly come out and admit that his behavior has been bad. I don’t see that relationship really fully healing. It’s sad because Kody used to be such a great dad.”

Keep reading to see what the kids of Sister Wives had said about their estranged dad over the years. 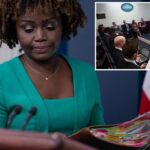 White House reporters out of patience with Jean-Pierre over docs: CNN 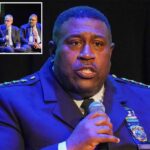