Raining on her parade? Sister Wives star Kody Brown slammed wife Janelle Brown for her decision to buy an RV to live in on the family’s Coyote Pass land during the Sunday, October 2 episode.

“This is nuts,” the family patriarch, 53, said after Janelle, 53, mentioned she had already put money aside to purchase the vehicle. However, the businessman added that he was trying to be more supportive of her plans.

Kody then explained in another scene of the episode that the wives are “working with you or against you” in plural marriage, noting that Janelle and Meri Brown were usually “compliant,” whereas Christine Brown was until not everyone in the family wanted to move to Utah. He then mentioned how fourth wife, Robyn Brown, ultimately wanted the group to work well together.

For Janelle’s part, the former real estate agent admitted she doesn’t feel like Kody actually listens to her whenever she talks to him.

Despite Kody’s grievances about Janelle’s decision to buy the RV, she still went ahead with it and moved onto Coyote Pass in June 2021. She documented the purchase and her move via Instagram at the time.

“The rental where I was living was sold, and I chose an alternative path to trying to find another rental,” she wrote at the time. “Not only is the housing market in Flagstaff as crazy as where you are I’m sure, rentals are even harder to come by. Presenting my new summer adventure — the RV life, but camped on our property.”

In another scene of episode 4, season 17 of the TLC series, fans got a glimpse at the other wives’ reactions to Christine’s departure from the family after her split from Kody.

“I can’t imagine after 30 years, like, how this looks,” Janelle told Christine in one scene. “You’ve just been so much, like, the fabric of everything.”

The two ladies have remained close friends despite Christine leaving the plural family. Janelle opened up in her confessional about how the Cooking With Just Christine star, 50, is “front and center in all my memories” and is “as big a part of my world as Kody is.”

While Janelle was upset over the news, Meri, 51, expressed how “angry” she was over the situation, whereas Robyn, 43, recalled her past divorce before she met Kody. 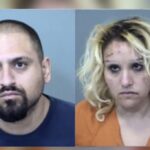 Kody Accuses Christine of Leaving for ‘Some Guy’