He landed in hot water.

An unhinged passenger was caught on video yelling profanities and mocking a Singapore Airlines crew member — demanding water after he was denied alcohol.

A TikTok video that has gone viral shows the man, wearing a cap and varsity jacket, standing in the aisle and yelling at the male employee after the flight from Bangkok landed in Singapore on Tuesday.

The flight attendant tries to calm the man down and asks him to return to his seat, but he goes on an expletive-ridden rant.

“You actually think I’m gonna listen to you? Why you don’t give me f—–g water, you f—–g idiot?” the unidentified passenger shouts.

“Give me water! You think I’m interested in your f—–g law? F— off! I’m gonna push you over!” he continues, before mimicking the flight attendant in a derisive tone.

The man is eventually handed a bottle of water, to which he sarcastically says, “After two hours? Wow, thank you so much. That’s really great.”

The TikTok video includes a caption that says the confrontation occurred while the seat belt sign was still on.

“Wasted all the passengers time for the ground staff security to take him off the plane,” the post says.

An airline spokesman told the Straits Times that the passenger had initially demanded alcohol and was behaving in an “unruly manner” during meal service.

“After his multiple requests … our cabin crew assessed the situation and politely declined to serve him alcohol to ensure the safety of the other customers,” the rep told the outlet.

The man also did not comply with safety instructions from the crew and caused a disruption to the other passengers, according to the airline.

He was removed by two auxiliary police officers as the cabin erupted in cheers and was given a verbal warning. It was not immediately clear if he faces additional penalties.

“The safety of our customers and staff is always our top priority,” the airline spokesman said. “SIA apologizes to all customers on board the flight for the inconvenience caused by this incident.” 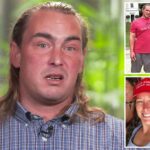 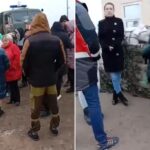