The world was in for a royal surprise when Prince Harry’s explosive memoir “Spare” was leaked early in stores in Spain overnight.

Now, bombshells from the book, which was kept under wraps ahead of its intended Jan. 10 release date, are emerging on Thursday, with sordid tales about his rivalry with “arch nemesis” Prince William and his thoughts on his “evil” step-mom Camilla.

While the Duke of Sussex, 38, clearly didn’t hold back, neither is Twitter, with many users blasting the formal royal for spilling royal tea.

“A grown-ass ‘military’ man..who served two tours in Afghanistan, has written a book..to whinge that he was left TERRIFIED, when his older brother shouted at him and broke his necklace,” someone penned.

“It just gets more and more pathetic,” they continued.

“For the love of God #ShutUpHarry and do one! So your brother called your wife difficult? That’s an understatement,” one added.

Another user scribed: “Yes wish they would just shut up,” along with the hashtag #ShutUpMeghan.

Added another person: “Let me get this straight….. Harry is b–ching because he was born into a centuries old royal family, had a screaming fight with his brother, and the royal family isn’t coddling his narcissistic wife?”

“#ShutUpHarry is a sad pathetic man child. The most tone-deaf person I have ever seen in my life. He literally has no clue how bad he looks every time he opens his mouth,” a user interjected.

Harry’s tell-all’s title “Spare” refers to his label as a being the “spare” royal to the heir to the British crown — his older brother, Prince William, 40.

Penguin Random House described the publication as a “definitive account of the experiences, adventures, losses, and life lessons that have helped shape” Harry.

Accounts from the leaked book include an incident when William, 40, allegedly physically assaulted Harry and broke his necklace, the first time he met his stepmother, Queen Consort Camilla and more.

Another anecdote that has surfaced ahead of the book’s official release is King Charles making “sadistic” jokes about Harry’s “real” father.

Ever since the Invictus Games Founder’s birth, rumors have swirled that his true father was Princess Diana’s ex-lover Major James Hewitt.

On one page, Harry wrote: “Pa liked telling stories, and this was one of the best in his repertoire. He’d always end with a burst of philosophizing … Who knows if I’m really the Prince of Wales? Who knows if I’m even your real father?”

The father of two went on: “He’d laugh and laugh, though it was a remarkably unfunny joke, given the rumor circulating just then that my actual father was one of Mummy’s former lovers: Major James Hewitt. One cause of this rumor was Major Hewitt’s flaming ginger hair, but another cause was sadism.” 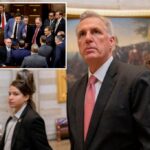 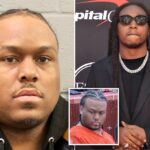