A Georgia sheriff has ordered an immediate investigation after shocking security video emerged of guards repeatedly punching a black detainee — who was later charged with assaulting them.

The footage shows the Camden County guards swarming in and grabbing Jarrett Hobbs, 41, who was being held on traffic and drug possession charges.

The first guard grabs Hobbs around the face and neck, as at least three others help hold him — with one of the staffers throwing around 20 punches at Hobbs’ head, even as he is clearly pinned down.

At least two others, in sheriff’s uniform, also throw punches during the initial confrontation. The four initial wardens all appear to be white, with a black colleague coming in at the end but not seemingly attacking him.

A second video from a camera outside the cell shows jailers drag Hobbs through the open door and hurl him against a wall — then again pile into him, with one appearing to throw a flurry of knees.

Once contained in a secure chair, the initial puncher then pushes him inside the initial cell — seemingly slamming him into the bench.

“This is a brutal beating, a brutal attack,” Daniels said, saying his client “was assaulted, punched multiple times in the back of his head, kneed in his head and dragged out of his cell.”

It was not immediately clear what sparked the violence, and Daniels did not release footage he has with audio. Citing court documents, CNN said it started after Hobbs refused to stop kicking his cell door.

Jail records show that Hobbs was charged with aggravated battery, simple assault and obstruction of law enforcement officers over the troubling Sept. 3 incident.

Federal authorities looked into the charges to determine whether he’d violated his probation stemming from his 2014 guilty plea to conspiracy to commit bank and wire fraud — with the surveillance footage only then emerging when it was submitted as evidence.

A judge’s order on Oct. 20 said a probation officer testified that Hobbs had “punched one deputy in the face while punching another deputy in the side of the head. One deputy sustained a bruised eye and a broken hand as a result of the incident.”

Daniels insisted that the guard’s broken hand came as he swung at Hobbs and missed, punching a wall. He also said the video proved that Hobbs would have been justified in fighting back against the unlawful assault.

Camden County Sheriff Jim Proctor insisted that the footage only contained “a portion” of the incident, without elaborating on what led up to it.

Still, he said he has “ordered an internal investigation of the incident to begin immediately.”

“If deemed necessary an additional agency will assist with the investigation,” Proctor said, refusing to identify the officers involved.

A spokesman for the sheriff declined to answer further questions, including whether the guards involved remained on duty.

“The physical wounds have healed the best they can,” his attorney said. “But mentally, no. He thought he was going to die.” 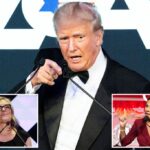