The Senate passed an $858 billion defense spending bill on Thursday that would end the Defense Department’s mandate for troops to receive the COVID-19 vaccine.

The Biden administration had opposed efforts to include the vaccine mandate repeal in the 2023 National Defense Authorization Act, but Republican negotiators were successfully able to include language nixing the 2021 directive by Defense Secretary Lloyd Austin in the bill’s final language.

The 2023  NDAA passed the Senate by an overwhelmingly bipartisan margin in an 83-11 vote. It now heads to President Biden’s desk for his signature.

Thirteen GOP senators, led by Sen. Rand Paul (R-Ky.),  had vowed not to vote in favor of the annual spending bill if the vaccine requirement was not rescinded. Service members who refused to get vaccinated faced expulsion from the armed services.

“The United States simply cannot afford to discharge our brave men and women in uniform and lose the investments we have made into each and every one of them due to an inept bureaucratic policy,” the group of GOP lawmakers wrote in a letter to Republican Senate leaders.

The White House and Defense Department argued that ending the jab requirement would impact military readiness.

“We continue to believe that repealing the vaccine mandate is a mistake,” White House National Security Council spokesman John Kirby said earlier this month. “Making sure our troops are ready to defend this country and prepared to do so, that remains the president’s priority and the vaccine requirement for Covid does just that.”

The final language rescinding the military vaccine mandate mirrored Sen. Marsha Blackburn’s (R-Tenn.) amendment to prevent service members from being fired for not getting vaccinated. Blackburn celebrated the passage of the 2023 NDAA on Twitter Thursday, writing, “It’s official — the FY2023 National Defense Authorization Act has passed the Senate with my measure to repeal Biden’s military COVID vaccine mandate.”

Blackburn claims that more than 8,400 active-duty service members have been fired for not getting vaccinated, and more than 10,000 Army Reserve and National Guard troops have been barred from drills, training, and pay because of their refusal to get vaccinated.

According to the New York Times, some Democrats privately held concerns about how the mandate was affecting military recruitment efforts.

Efforts by Sens. Ted Cruz (R-Texas) and Ron Johnson (R-Wisc.) to include measures to reinstate and provide back pay to service members fired by the military for refusing to take the COVID-19 vaccine were thwarted and not included in the final bill.

The bill also boosts next year’s Pentagon budget by $45 billion more than Biden, 80, had requested. It also grants 4.6% pay raises to military personnel, provides $800 million more in security aid to Ukraine, and gives the president authority to give Taiwan up to $1 billion in weapons and munitions.

The 2023 NDAA also includes changes to the Pentagon’s policy for handling sexual assault and harrassment cases and earmarks $1 billion to resupply the nation’s defense stockpile. 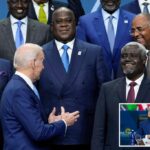 Biden jokes about plan to visit Africa, tells leaders he may ‘eat all your food’ 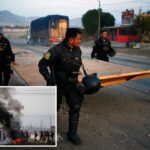