Ageless beauty! Demi Moore has been gracing both the big and small screens ever since she starred on General Hospital in 1982. After appearing in a handful of films like Choices, Parasite and Blame It on Rio in the early ‘80s, the actress truly found A-list fame after starring in St. Elmo’s Fire in 1984.

She went on to star in About Last Night, One Crazy Summer and The Seventh Sign before landing the lead role in Ghost opposite the late Patrick Swayze. The movie continues to be one of her most recognizable films to this day – even though Demi originally thought the concept of the movie wasn’t going to translate on screen.

“It’s shocking to think this movie was made 25 years ago and being a part of something that has had the beauty of truly standing up against the test of time,” she told Glamour in 2013. “It’s a love story, and it’s a guy – a dead guy, trying to save his wife – and there is a comedy part, but really, really it’s a love story, and I thought, ‘Wow, this is really a recipe for disaster.’ It’s either going to be something really special, really amazing, or really an absolute bust … What’s interesting is that I learned one really big lesson on this film, which is that I went to see it and everyone was moved.”

After the success of Ghost, Demi continued nabbing lead roles in career-defining films, including A Few Good Men, G.I. Jane – in which she famously shaved her head for the role – Charlie’s Angels: Full Throttle, Mr. Brooks and more. Some of her more recent roles include Rough Night, Empire, Brave New World, The Unbearable Weight of Massive Talent and the upcoming 2023 TV miniseries, Feud.

It’s clear that Demi’s had one of the most successful careers in Tinseltown, so it shouldn’t come as a shock that she’s also dated some of the biggest names in the business, including Bruce Willis, with whom she shares three children, Rumer, Tallulah and Scout. The pair wed in November 1987 but called it quits in October 2000.

Three years after her divorce, the actress shocked fans across the globe after she stepped out with That ‘70s Show alum Ashton Kutcher, who is 15 years her junior. The pair dated for two years before tying the knot in September 2005 – they were married for eight years before going their separate ways in October 2013.

From countless movie premieres to shacking up with some of the biggest names in Hollywood, it shouldn’t come as a surprise that the actress is a natural on the red carpet. Keep scrolling to see some of Demi Moore’s best braless looks over the years! 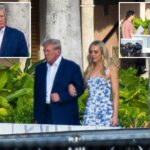 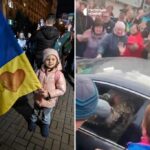