The search for a 20-month-old Georgia boy who was reported missing last week from his playpen has turned into a criminal investigation, as a 911 dispatch call revealed that the boy’s mother told authorities that she believed he was snatched from his home.

Chatham County Police Chief Jeff Hadley confirmed Monday that authorities are investigating whether there was any criminality in the disappearance of Quinton Simon last Wednesday from his Savannah home.

“We don’t have anything confirmed, so we can’t say anything absolutely,” Hadley told reporters, Savannah Morning News reported. “But it is fair to say that our efforts and the cooperation with the FBI providing an abundance of a resources to us, that we are looking at the criminal investigation aspect of it, as well.”

“We want to make sure we do this as professionally and as expertly as we can, so if — and I say if — we have to prosecute anyone in this case, that we’ve done it right,” he continued, WJCL reported.

More than 40 FBI agents are assisting local police in searching for Simon, whose 22-year-old mom, Leilani, reported him missing the day after she last saw him in his playpen at the Savannah home she shares with her parents.

On Monday, firefighters were called out to the home to pum the family’s pool, the news outlet reported. It was not immediately clear if any clues were found.

Meanwhile, Hadley said the 911 call placed by Quinton’s mother would not be publicly released due to the ongoing investigation – but WJCL obtained the dispatch call, which sheds some light on what police were told.

“Complainant advised her 1-year-old son is missing,” the dispatcher is heard saying, according to the outlet. “She woke up, her door was open. Advised he’s unable to open a door. Thinks someone came in and took him.”

Police previously said they don’t believe foul play was involved in the case.

Quinton’s babysitter has told WSAV that she was supposed to watch the toddler and his brother the day he vanished — but received a cryptic message that left her alarmed.

“I got a text this morning saying they would not be here — would not be babysitting them at 5:29 [a.m.]. Which was kind of odd because I have them even when she doesn’t work,” Diana McCarta told the outlet, referring to Leilani.

The boy lives in the house with his mom, his 3-year-old brother, his mother’s boyfriend and his maternal grandparents, local ABC affiliate WJCL reported.

His grandparents, Billie Jo and Thomas Howell, have legal custody of Quinton and his older brother, according to the station. 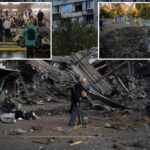 Russia pounds Ukraine with missiles a day after killing 19 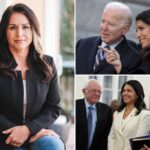