Balenciaga has taken a hit yet again over photographs from an axed ad campaign that shows a book featuring a Belgian artist whose work includes depictions of castrated toddlers.

Photos from the brand’s now-canceled spring 2023 ad campaign show French actress Isabelle Huppert posed in a Manhattan office with a stack of books behind her.

Notably in that stack of books is a title celebrating Belgian painter Michaël Borremans, whose works frequently feature children.

The David Zwirner gallery in Hong Kong, where Borremans’ “Fire from the Sun” has been shown, described his paintings as “toddlers engaged in playful but mysterious acts with sinister overtones and insinuations of violence.”

In that same ad, a $3,000 Balenciaga x Adidas handbag was shown sitting on a desk alongside paperwork from the 2008 Supreme Court decision in U.S. v. Williams, which confirmed that the promotion of child pornography is illegal and not protected by freedom of speech.

The images featuring Borremans’ book of work as a prop was swiftly taken down from Balenciaga’s website this week after a different ad campaign came under fire for featuring kids alongside stuffed animals wearing bondage-style attire.

In a statement Monday, the brand apologized for missing the mark with both ad campaigns.

“We strongly condemn child abuse; it was never our intent to include it in the narrative,” the luxury couture company wrote. “The two separate ad campaigns in questions reflect a series of grievous errors for which Balenciaga takes responsibility.”

The company later addressed the inclusion of legal documents from the U.S. v. Williams Supreme Court case, noting: “All the items included in this shooting were provided by third parties that confirmed in writing that these props were fake office documents.”

They added, “They turned out to be [real legal] papers most likely coming from the filming of a television drama.”

Balenciaga said the “inclusion of these unapproved documents” in the ad was due to “reckless negligence.” The company has since filed a $25 million lawsuit against the parties allegedly responsible: production company North Six and set designer Nicholas Des Jardins and his namesake company.

The company says it takes “full accountability” for its “lack of oversight and control of the documents in the background” and pledged to do things differently moving forward.

“We are closely revising our organization and collective ways of working,” Balenciaga said. “We are reinforcing the structures around our creative processes and validation steps. We want to ensure that new controls mark a pivot and will prevent this from happening again.”

As a result of the controversy, the company said it will be working with “organizations who specialize in child protection and aims at ending child abuse and exploitation.”

“We want to learn from our mistakes and identify ways we can contribute,” the brand concluded. “Balenciaga reiterates its sincere apologies for the offense we have caused and extends its apologies to talents and partners.” 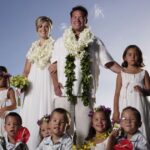