Scr8pfest 23.1 was held at Newton, North Carolina at the American Legion Fairgrounds from September 24-25, 2021.  We have years of coverage for Scr8pfest, and every single year the show continues to get bigger and better! 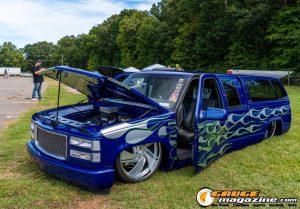 As many years before, if you were coming from a bit of a ways away, you were able to bring your RV or camping gear and camp at the event for a very low price.  Who wouldn’t love to wake up and walk right out into a car show?  You can count us in!  You were also able to stay at one of the host hotels.  If you have ever had to stay at a host hotel for a car show, you know what happens when the show comes to an end!

The American Legion Fairgrounds had the perfect paved route for the rides that attended to cruise throughout the day along with loads of grassy spots for you to park your ride.  Vendors were lined up along side the paved route, you could find pinstriping, parts, shops, food, apparel and everything in between. Scr8pfest 23.1 may have just had everything wanted at a car show!

On the opposite side of the show, you could follow the sound and find the audio area doing demo’s and competing in the 4 classes that were available.  The four classes available were Wall, No Wall, Budget Build, and Street Battles.

Although the event was postponed last year, that did not change the attendees decision to come out at the later date and make the show amazing!  Scr8pfest 23.1 made sure that the event continued on as it should have and it was better than ever!

Awards were given out to the Top 50 rides that were picked by judges along with some specialty awards.  Congratulations to all owners and rides that took home an award!

Keeping Your Car Safe When Leaving For Holidays