House Oversight Committee Chairman James Comer called fellow Republican Rep. George Santos a “bad guy” in an interview Sunday — but said it’s not up to him whether the under-fire freshman lawmaker should be ousted over his lies.

Comer (R-Ky.) said the embattled Long Island congressman — who lied about much of his personal life story during his successful 2022 campaign — would be removed from office if its found that he violated campaign finance laws.

“Look, he’s a bad guy, this is something that you know it’s really bad,” Comer said during an interview on CNN’s “State of the Union,” later adding, “At the end of the day, it’s not up to me or any member of Congress to determine whether he can be kicked out for lying. Now if he broke campaign finance laws then he will be removed.”

The comments come after a small group of Republican House members called on Santos to step down over revelations he lied about his past, including his employment history, college education and Jewish heritage.

Santos even told a tall tale about being a star player on the Baruch volleyball team, the Nassau County GOP chair said last week during a press conference where local officials urged him to resign.

The New York representative, who beat Democrat Robert Zimmerman last November, has resisted calls to quit — despite being under investigation by both state and federal prosecutors, who are reportedly probing his financial disclosure filings.

“George Santos was duly elected by the people, he’s gonna be under strict ethics investigation – not for necessarily for lying but for his campaign finance potential violations so I think that Santos is being examined thoroughly. It’s his decision whether he should resign, it’s not my decision,” Comer said on CNN.

“But certainly I don’t approve of how he made his way to Congress and I haven’t even introduced myself to him because it’s pretty despicable the lies that he told.”

New York Democratic Reps. Ritchie Torres and Dan Goldman filed an ethics complaint against Santos last week as they called for an inquiry into the Republican by the House Ethics Committee. The letter from the two reps alleges “to file timely, accurate, and complete financial disclosure reports as required by law.” 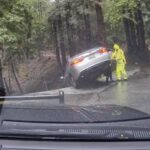 3 rescued from car teetering over cliff’s edge in California 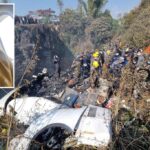